Yesterday, Wednesday, just up the road as it were, Prince Charles, the heir to the British throne, visited Sligo where he lost his grand-uncle Lord Louis Mountbatten to an IRA bomb in 1979. On reflection it surprises me that a man of his connections, the last English Viceroy to India, would have been visiting Mullaghmore, in such a casual way at the height of the troubles. That area of County Sligo is one of the most spectacular in the whole countryside with the majestic Ben Bulben in the background and Dumcliff with the grave of W.B. Yeats between it and the sea. The lines on his headstone are so easily remembered. They are the final lines of a valedictory poem written by Yeats himself;    ‘Cast a cold Eye on Life and Death horseman pass by’.

“Under bare Ben Bulben’s head
In Drumcliff churchyard Yeats is laid.
An ancestor was rector there
Long years ago, a church stands near,
By the road an ancient cross.
No marble, no conventional phrase;
On limestone quarried near the spot
By his command these words are cut:
Cast a cold eye
On life, on death.
Horseman, pass by!” 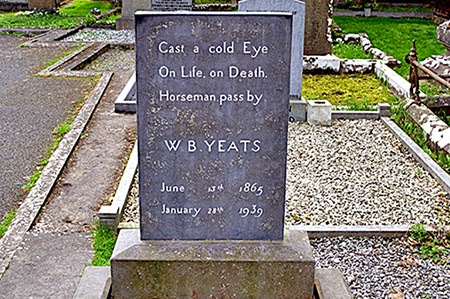 I have dropped into Drumcliff a good few times down the years and brought visitors to it from time to time. Not far from Drumcliff is Lissadell House now thankfully open to the public after a torturous court case regarding ‘rights of way’ between the owners and Sligo County Council on behalf of itself and members of the community who felt they were entitled to use certain routes through the estate. The courts found otherwise.
Lissadell is well worth a visit for the house and also the walled garden which when I visited some years ago had a collection of over a hundred species of the humble spud. Another memorable visit I had to Lissadell was for the concert of Leonard Cohen. Mister Cohen was well aware of Yeats and of his connection to the house and the Gore Booths. Mullaghamore is a lovely sea-side harbour village overlooked by Classiebawn Castle. Prince Charles had arrived in Sligo in the morning and visited The Model Art Gallery where he gave an impressive conciliatory speech re-echoing the Queen of England’s speech in Dublin Castle on her visit in 2011 wishing ‘that things had been done differently or not at all’. His speech is well worth a study. He talked of his own deep personal grief on the death of Lord Mountbatten and it must have been a poignant and affecting visit to the place where Lord Mountbatten and those who accompanied him were killed in ‘79.
Thankfully those dark and terrible days of ‘the troubles’ are –hopefully- in the past and that all involved can ensure that. As the Prince said  "Let us, then, endeavour to become the subjects of our history, and not its prisoners." Of course the poems of Yeats provided a rich vein of majestic quotes as they invariably do, “And I shall have some peace there, for peace comes dropping slow.”
It was a faceted visit and what more can this overarching layer of the English establishment do in a conciliatory way.

The Dublin/Monaghan bombings occurred on May 17th 1974 in Monaghan town and on three streets in Dublin. These were in Talbot St., Parnell St. and Leinster St. Over thirty people were killed in the highest toll of deaths on a single day of the troubles. A large number were young women, originally from rural Irish towns who were employed by the Civil Service. Many were rushing to get to their trains going home for the week end. It was a time when communication was a far cry from today so many an anxious parent and relative waited at railway stations through the country for their loved ones to arrive. This scene was replicated at Boyle station and was described to me over the years by  a friend of mine who told me of reassuring someone running frantically along the Boyle platform to find her brother. A Northern Ireland group claimed responsibility for the bombings seeing it as a kind of rebuttal or reprisal action against the southern state for its perceived lack of control of the republican movement within its borders. It is felt by the relatives of those killed in those bombings that the investigations into the bombings have not been as thorough as they should have been and that a body of evidence regarding them is available but submerged for political reasons even thirty six later. it is only on the anniversary of the bombings each year that national attention is afforded the atrocities and the hope is that, in time, ‘the truth will out’ on this collective atrocity.

Roscommon v London.
The best of luck to the Roscommon team and all associated with them when the county begin their championship campaign in Ruislip on Sunday next against London. There is considerable pressure on Roscommon to lay down a marker in this game as they are being talked of as Connacht title contenders this year. The recent championship has taken its toll with the injury to Kevin Higgins of Western Gaels. I have not heard how serious the injury to young Murtagh who limped off in Castlerea in the St. Faithleach’s versus Roscommon Gaels game over a week ago.
There is a fine game in prospect in the Munster hurling championship in the clash of Clare and Limerick both of whom would have aspirations of going a distance in their hurling championship. A good start would set the momentum for the winner.

This game turned out to be the battle that was anticipated. Though Donegal won and seem to have a better team in terms of personnel they were made fight all the way. There has been considerable comment on the way Michael Murphy of Donegal and Sean Kavanagh were so closely marked, which was very unseemly. How linesmen and umpires cannot be more interventionist puzzles me and must frustrate players, especially those flair players.

I have a soft spot for the humble Junior team and intend to keep an eye on its progress through the summer. Last Friday on a cold inclement evening they had another good win, this time in the championship, over St. Faithleach’s. The final score was Boyle 1.13 St. Faithleach’s 0.7. It was a grand open game without a hint of malice on both sides. The Boyle team was as follows: J.McDermott/B. Goldrick/D. Mattimoe/C. Beirne/G. Goldrick/ M. Goldrick/ D. Kelly/ C. Brennan/ T. Halligan/ C. Deery/ C. Flanagan/ D. McGovern/ K. Kelly/ B. Kerins/ L. Conroy with D. East and T. McGarty. Like all classic junior teams there is a range of age and experience here. There may be some more fall-off as the senior team games take place but there are also some players who were not available on Friday evening last. Their next games are against Kilglass in the league and Kilbride in the championship, both in mid- June.

Boyle Celtic’s Cup endeavour had everything

I arrived very late at this Cup thriller between Boyle Celtic and their biggest rivals City Utd. of Sligo in Boyle on Wednesday evening. I was aware that Celtic were struggling to put out a team on this particular occasion which boded ill for a game against the strongest team in the Sligo Leitrim League. So it was not with optimism that I arrived only to hear that Celtic were 2 goals to 1 in front. I thought that it had started later than it actually had but I was informed that the game had only about ten minutes to go and that Boyle had just the bare eleven players. They were hanging on. I was pleasantly surprised. The clock ticked down as Celtic’s rear-guard action continued. But just four minutes from the end a high ball dropped into the Celtic area bopped around ominously and while it was cleared, the referee, from maybe thirty yards or so outfield, whistled. “Goal” he announced to the shock of the Boyle players and their small band of supporters. As you can imagine this decision was challenged and heckled but the decision stood, 2 all, a draw. A couple of minutes later, full time. Extra time was a holding period for Boyle as they edged towards a penalty shoot-out. A brilliant free kick from Lee McKilleen bounded off the angle of the goal accompanied by the sighs of the players and supporters. The two periods of ten minutes each passed without too much incident as the Boyle players lacking any fresh replacements fought valiantly. Then the extra time ended. It was now penalties and a pretty even opportunity. The goal to be used was the inner one away from the ‘crowd’. Celtic’s first man up, bang, wide. Aah. The run of penalties went near its course and with the fifth penalty to City to win it …missed, four all. Now to sudden death. Goal, goal, goal, then a Celtic miss but lo and behold City too missed. After all eleven players had taken their turn the score was again even at 9 penalties each. So to the first player was up again for Celtic. He had missed the opening penalty but scored and redeemed himself on the second attempt, ten out of twelve. Next up the City player… bang …off the goal post. Boyle had won. Relief, slight disbelief, smiles and banter. While it was not a national title or anything it was a great effort in trying circumstances. The goal that wasn’t, was forgotten. All shook hands, sportsmanship reigned and Celtic have something to salvage from their season. I’ll only mention one player from the evening and that is Lee McKilleen who is just such a fine soccer player with skill, heading ability, energy and commitment. I imagine he could have played at a high level had he so wished. So a smiling Celtic team, manager and support drifted away from a soccer game that had it all.
Those on duty on Wednesday evening were Kyle Suffin, Gerry Brennan, Lochlainn Conboy, Lee McKilleen, Owen O’Donohoe, Shane Battles, Aaron Calpin, Sean Mac Cormack, Mick Corrigan, Marcus Guckian, Luka Roddy.  Manager, Gerry Emmett.