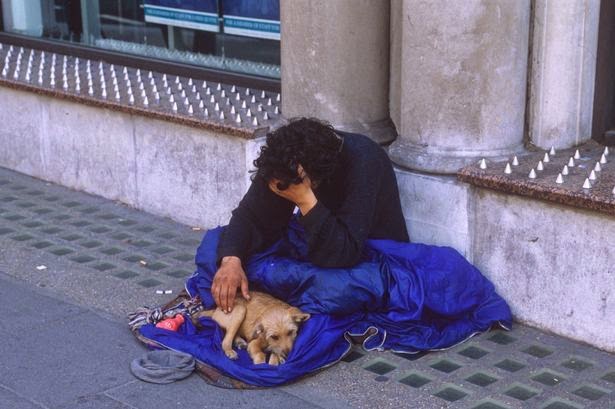 As the water conflict takes a short break before next week’s protest in Dublin another issue has spiralled to the top of the agenda nationally but especially in the capital. Being homeless with all that entails is thankfully not something most of us have to contend with. A French socialist, Charles Peguy, once wrote that “Short of genius a rich man cannot imagine poverty”.
• The death in a Dublin doorway of Jonathan Corrie has brought the issue to the fore. He was found at 8 am on Monday and removed, with little ceremony, at 10 am as recorded by Kate Holmquist in The Irish Times today.  Ironically this happened in Molesworth St. within view of the country’s Parliament. Of course he is not the first or will not be the last person to die in this way.
• The number of homeless continues to increase now into a strata of society that was possibly not endangered heretofore. The rising rents especially in Dublin, the lack of housing, the lack of the classic ‘bedsit’ due to recent constrictions and many other causes has led to this. Even in the famous Celtic Tiger years there were ‘homeless’ people on the streets of Dublin. At the turn of the 1900s’ Dublin was one of the worst cities in Europe in respect of tenements and overcrowding. Efforts to alleviate this needed the disasters of tenement collapse and deaths to prompt action by central authorities. Much of the resources of those central authorities now go towards the provision of ‘rental’ allowances and supplements. We have the crazy situation of families being accommodated in hotels! There are a number of voluntary agencies such as Focus Ireland who are trying to alleviate the trauma in this area. The figures suggest that there are 160 homeless individuals and 800 homeless families in Dublin. The problem is on such a scale that only Government intervention can alleviate it.
• Vincent Browne argued last night for the provision of basic shelter accommodation for people consigned to sleeping overnight on the streets. But the counter argument is always, apparently, it is not as simple as that, it is a complex issue, though it is a question of life –of a sort-and death.  One of the pictures of the past decade was one in which the famous Troika representatives first appeared in Dublin pictured as they walked past a person begging on the pavement. There has always been such people and apparently there always will. Is it as inevitable as that in this supposed Christian country? I am conscious that I am not very well qualified to write well or in a knowledgeable way on this subject but I felt that it is another indictment on Irish society  and deserved my two pence worth as the Christmas bells begin to jingle.

‘Ear to the Ground’ Show

There are always little snippets that seem in such different relief to the paragraph above. From time to time I trip across the fine farming programme ‘Ear To The Ground’. The one on Thursday November 30th featured the preparation of animals for shows. The tender loving care that these animals got was something to behold. I suppose I should not have been surprised when I think of people who love their dogs and treat them so well. The programme dealt with the detail of the preparation pre show and of the grooming niceties of washing and blow-drying with the use of lacquer and spray paint.  Apparently there are people who make a good living preparing animals for these shows as one gentleman related. The final straw was the use of hair extensions to the tails of some animals!

The teachers unions went on strike for a day on Tuesday last and threaten to do so again in the new year. The issue is not pay this time but it is about changes to the Junior Certificate Examination and to how it is to be corrected with the allocation of 40% of a subject portfolio to teachers to assess their own students. Teachers cite their difficulties in doing this with attendant pressures in terms of knowing the children and their families too well, not letting themselves and their teaching qualities and their classes down by being severe and so on. While this may be done at third level there is a degree of anonymity there that does not occur locally. This of course is changing somewhat as many teachers avoid living in the town in which they work, a practise that also obtains with Gardai. Once the local teachers and Gardaí were very active members of the community in which they worked.
• Reading Colm O’Rourke’s assessment of the teacher union strategy in The Sunday Independent he wondered why they did not suggest that they  would just not go down the assessment road without the need for ‘strike’. He suggested that there many important educational issue to fight over in recent years especially pupil-teacher ratio, the withdrawal of career guidance hours, the severe cut to the wages of young teachers beginning their employment, the drastic reduction in promotional prospects for young teachers and the reduction to teachers’ pay and so. In terms of young teachers the unions, dominated by senior voices in my time, do not have a great track record of care of their interests. Then it was a system of posts for various school responsibilities which were carried out with a range of diligence from hero to zero. Teaching is a changing landscape so it is important that teachers choose the appropriate battleground and ally their interests with that of their students and the parents of those students.

A lady from Frenchpark contacted me looking for a Roscommon GAA football song. She called it ‘A Roscommon Man’s Dream’. I had a few football songs some time ago but I think I gave them to someone who was collecting such songs. They were mostly referring to the exploits of the Roscommon teams of the forties. It was a tradition in counties and indeed also with clubs of yore to celebrate a great victory in song. If anyone is aware of or knows anything of the song above or any such songs they might contact me at 086 816 33 99.

The remarkable goal from Dublin soccer ladies player Stephanie Roche of Peamount Utd. is in the remaining three for FIFA’s soccer goal of the year. The other two goals are from current Manchester Utd. player Robin Van Persie of Netherlands in the World Cup and James Rodriguez of Real Madrid and Colombia. I imagine most people who follow such things have seen Stephanie’s  goal by now on U tube or wherever. Apparently the result rests on a public online vote.

To the late Christy Regan's family on the publication of their book in memory of Boyle photographer Christy Regan. The turn-out on the night was testament to the regard Christy and the Regan family are held in by the Boyle community.
• Best Wishes to Boyle GAA on their major project on Saturday night next ‘Who Wants to be a Thousandaire’. The work they have done on the project deserves it being a huge success.
• Keep in mind the Boyle U 21 team play Clann na Gael in the county Semi-Final on Sunday in Knockcroghery. The delay in the running off of this competition has diluted the patience of some people who would usually be very supportive.

I saw somewhere that a number of North Korean people received a very strict sanction for watching the television programme EastEnders followed by the comment; ‘One would have thought that watching EastEnders was punishment enough ’

At the end of the news a couple of evenings ago there was this nice little story of the rescue and rehabilitation of a turtle and of its airline return to his more natural warm waters. While I have nothing against turtles and am pretty decent to and with animals in general it seemed incongruous in terms of what is happening in this country right now. Perhaps it had a platinum V.H.I. plan.