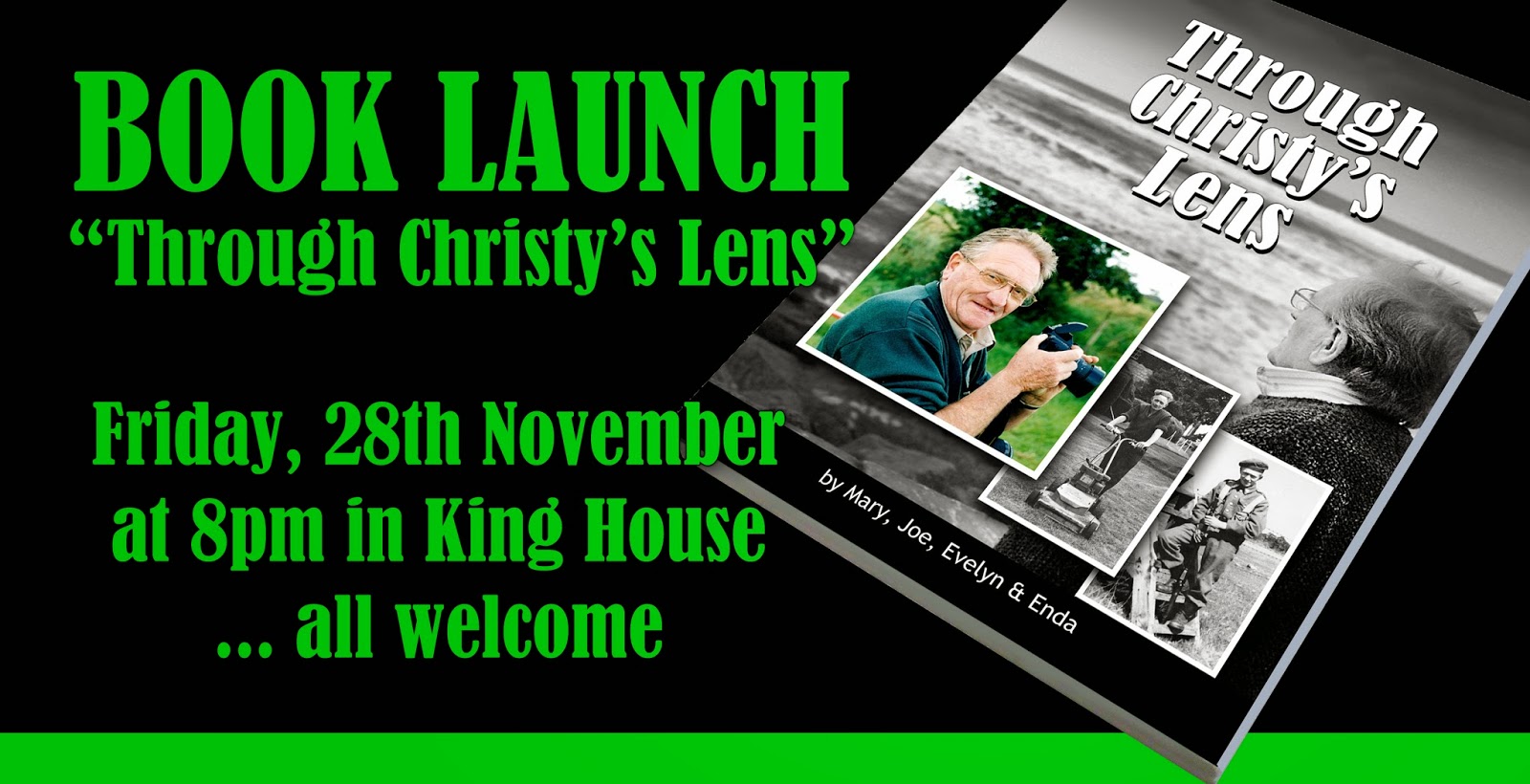 The Regan family will proudly launch their tribute to Christy on Friday night next at 8 in King House and all are welcome.  There are very few Boyle people who have not encountered Christy and his camera down through the decades. His pictures became the illustrating accompaniment of news stories for decades in local newspapers, especially in the Roscommon Herald, be they first communions, confirmations, weddings, musicals, political and sporting events and the myriad of activities that are part of the fabric of community life in this region. This book will give a flavour of those past events. They are just a cross-section of the major archive which Christy accumulated in his career. In doing this he has left a huge legacy of social and historical material for future generations. So I commend the Regan family on this prompt window into Christy’s archive and perhaps it can be developed in some way now that the digitising age is here. The book also includes tributes and reflections from family and friends on their memories of Christy who was first and foremost a great family man. Proceeds from the publication will go to the oncology department of Sligo General Hospital.


‘There is a dance in Billy Brennan’s barn tonight’


A minor news snippet brought me back a few years when I came across it recently. It related to the sale of a barn in County Monaghan which featured in Patrick Kavanagh’s poem Inniskeen Road.

Inniskeen Road:  July Evening
The bicycles go by in twos and threes -
There's a dance in Billy Brennan's barn tonight,
And there's the half-talk code of mysteries
And the wink-and-elbow language of delight.
Half-past eight and there is not a spot
Upon a mile of road, no shadow thrown
That might turn out a man or woman, not
A footfall tapping secrecies of stone.

A number of Kavanagh’s poems featured in secondary school syllabi down the years and represented a time in Ireland which may be gone now but remerge vividly for older generations when they happen to read Kavanagh’s poems. Kavanagh wrote two tribute poems commemorating his parents.

‘Memory of My Father’,
Every old man I see
Reminds me of my father’

Ending with the powerful last verse

‘Every old man I see
In October-coloured weather
Seems to say to me
"I was once your father."

This was for me a veiled view of his father whereas the images of his mother are very clear. A little oddly I suppose we can view our parents differently in that way.

‘In Memory of My Mother’.
‘I do not think of you lying in the wet clay
Of a Monaghan graveyard’

O stony grey soil of Monaghan
The laugh from my love you thieved;
You took the gay child of my passion
And gave me your clod-conceived.

I am looking through a pretty battered book of school poetry ‘Soundings’ as I write. It was re-published a year or two ago and contains many classics. It is true to say that many people are able to recite lines from the poems they learned in their youth, ‘As in wild earth a Grecian vase’, which is the last line of Padraic Colum’s poem  ‘A Poor Scholar Of The 'Forties’.


Since I have started with two paragraphs on a book and then the poetry of Kavanagh I might continue the theme. When was the last time you visited a library?  When I was in Boyle Abbey local people would occasionally come with visitors from abroad and whisper guiltily  ‘I haven’t been in here since…………..’ (Maybe some people are saying that now about the local church!). Anyway we are so lucky in Boyle to have a beautiful library. Indeed other Libraries in the county such as Castlerea, Ballaghaderreen and the Roscommon are also fine libraries. Elphin and Strokestown are more constrained. It is one of the great  free (almost) services. Libraries today offer a broad range of services and activities and have kept up well with modern technology. The access to digitised collections especially the local county newspapers is of particular interest. I referred to a recent very successful event there a few weeks ago when Chris O’Dowd and Nick V. Murphy read from their recent publication, Moone Boy: The Blunder Years to a number of national school classes. The library is also involved in a county-wide national schools quiz.
One of the great advantages the  Irish have is their knowledge of the English language which they are wont to use with flair and abandon. This reputation is internationally accepted and endorsed. Four Irish writers have received the Nobel Prize for literature, George Bernard Shaw, W.B. Yeats, Samuel Beckett and Seamus Heaney. James Joyce was certainly in that league but did not get the accolade for reasons I forget now. When I attended secondary school in Roscommon C.B.S. I was a pretty regular visitor to the library just across the road. My specialist subject then was World War Two! In talking to Father Tony Conry, who was home from Brazil last summer where he works particularly in the education sector, he referenced the odd fact that Brazilians do not read in any way near the degree that we do and that this is a significant deficit for them. One little piece of advice I would give a reader is; do not struggle too much with a book there are multitudes of books which will just sweep you along without that struggle.

I know there are dedicated members in each library. For children especially it is an oasis of wonderment. So I would encourage you to visit and explore this huge resource in its imposing setting  on our doorsteps.  Patricia Flaherty and her staff will be only too happy to see and guide you.


• Thousandaire. Next week, Saturday the 6th sees Boyle GAA’s ambitious fund-raising extravaganza Who Wants to be a Thousandaire. I expect it to be a great success and worthy of the huge efforts which the club members have put into the organisation of the event.
• The annual Christmas GAA Quiz is scheduled for Saturday December 27th and we hope to see many faces which have been abroad and away on that occasion.
• Boyle Senior GAA Club A.G.M. takes place on Saturday December the 13th in the Abbey Park Centre at 6.
• Very best wishes to Cian Smith, a sentiment which I am sure is endorsed by so many in Boyle and all in the GAA club.
• Corofin looked pretty awesome in their comprehensive win over Ballintubber in the Connacht Senior Club Final. It would have been some battle had St. Brigid’s been there as Corofin have a score to settle with Brigid’s from a few years ago.
• Best wishes to St.Ciaran’s (Fuerty/Athleague/Creggs) Junior Ladies football team who play Murroe Boher from Limerick, at Duggan Park, Ballinasloe, on Saturday the 30th, at 1.30 in their all-Ireland Final.
• It is expected that Boyle will play the semi-final of the U 21 ‘A’ championship the week-end of the 5th/6th of December.

Posted by realboyle.com at 1:39 AM