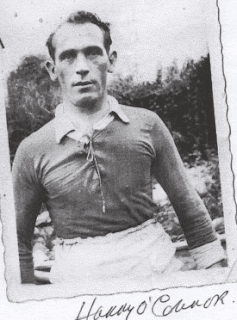 I very recently re-read the Ballinameen GAA History and re-visited the reputation of some former great footballers from that club back in the thirties and forties. The three stand-out players then were Harry Beirne, Paddy Kenny, and Harry O’Connor. Harry O’Connor is usually spelled without the ‘O’ but his sister insisted to her son Pat Cooney, decades ago, that the ‘O’ was also very much part of his name. Those three nominated players were part of the good Roscommon junior team which got to the Junior All-Ireland final of 1932 having beaten Cork in the Semi-Final. They lost the final to Louth. The Ballinameen trio would have come to the attention of selectors after winning the 1931 junior championship defeating Athlone (!) in Murray’s field Roscommon town. (Another member of the 1932 team who I got to know well in Castlecoote was Father Tomás O Láimhin brother of John Joe Lavin. A name that always rings a bell with me is Carlos and there was a Ned Carlos prominent with Ballinameen at this time). Ballinameen won the Junior again in ’34 the Golden Jubilee year of the GAA. Both Kenny and O’Connor are welcomed back to the Ballnameen team in early ’35 so they must have missed the ’34 win. Keep in mind the fact that there were only Senior and Junior championships until the late sixties and the junior championship was a really tough contest. Also, top players in Junior clubs were often head-hunted to reinforce good senior teams and this explains the reason why Kenny and O’ Connor might have tried their senior luck with neighbouring senior teams. It was also a better show-case for Senior county team selection. It crops up again in the forties when the Ballinameen team is absent and Paddy Paddy Kenny played with Mantua and Harry played with Boyle in the championship. If I was ever aware of this, I had forgotten about it.

Both Harry and Paddy were members of the emerging Roscommon team which won their first Junior All-Ireland in 1940 defeating Westmeath with Harry in his favourite position of centre-back and Paddy Kenny at wing forward. Paddy retired from inter-county football after the defeat by one point to Galway in the senior Connacht Final of ’41. Harry was there with the panel in ’42 and ’43 when Roscommon finally won the Senior All-Ireland Final defeating Cavan in a replay. That Harry was not playing at centre-back is understandable as Roscommon had one of its greatest ever players in that position i.e. Bill Carlos of Ballintubber and Tarmon.

Roscommon had defeated Galway in the Connacht senior league of ’42 after which Harry, a veteran by now, is credited with the remark that; “We have won something senior at last”. Harry was still there with the Breedogue team towards the late forties. Harry was said to be “one of the most fearless defenders in the game and he always put his whole heart into it”. He continued to follow the game through the fifties. In family folklore, he was referred to as being a friend of a connection of mine Willie (Bill) Heavey from Fuerty a member also of the ’43 Roscommon team.

He was employed as a ‘ganger’ with Roscommon County Council. I was told that he was engaged to be married to a lady from west Roscommon but on Christmas Eve 1957 he was involved in a car accident and though he recovered for a time he declined again and died in June (?) 1958. His death at the age of 44 was an occasion of great grief for his family the Ballinameen community and Roscommon GAA. At the Connacht championship match on the Sunday of his removal to St. Attractra’s Church the two teams and the estimated 10, 000 supporters stood in silence for two minutes as a mark of respect for this fine and popular Roscommon footballer. He is buried close to the gate in Caldra cemetery and his burial place is marked by a fine Celtic cross.

His sister Mary was married a Garda Cooney who was stationed in Ballinameen. Then and they transferred to Granard. Harry had two brothers Pat and Jimmy who also played with Ballinameen. Harry was represented at various Roscommon events in later years, commemorating that great team of the forties, by his nephew Pat Cooney, a gentleman, from Granard and latterly Shankhill, Co. Dublin. I got to know Pat a little over the years and was very saddened to hear of his death late last year.  I only heard about that a week or so ago.

So Harry with the Royal appendage of O’ to his Connor will not be forgotten in his native Ballinameen or for his contribution to the great Roscommon team of the 40s’.

[Hopefully, I can explore the life and times of Paddy Kenny at some future date. I have a faint memory of seeing him and hearing him play the fiddle/violin in the then Kelly’s Bar in Ballinameen in the early seventies not long after me coming to North Roscommon in ’72.]

Posted by realboyle.com at 7:24 AM