Hay Making in Decades Past. 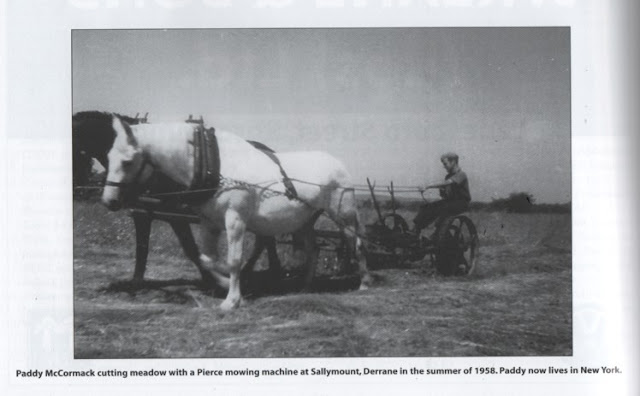 This was one of the more favourable farming ‘campaigns’ of the yearly cycle of my youth. It was clean, the days were long, the weather while difficult at times was generally bright and amenable. One could also achieve a good deal in a day.

In the mid-fifties, the meadow was cut by a horse-pulled mowing machine. There was little drama in this task. The corncrakes were often victims of this chore. But nature was not seen in a studied way then and seemed eternally capable of being replenished. The only variable in the meadow mowing was the reverse run to ‘take out’ the ‘back swarth’ adjacent to the ditch or wall.

The cut meadow was left for a number of days and then the teasing started. If the weather was kind this could be a clear run of defined tasks. In my boyish days, the swarths were shaken out manually with hand forks but in my memory, this was short as we had a hay turner which raised and shook the meadow for proper drying. A kind of curing process. The only grass which caused some difficulty was the one nearest the ditch/wall/hedge, i.e. the ‘back swarth’. After a couple of days, the real action began when the process was advanced to a real saving stage. The big intimidating horse rake was introduced to rake the meadow into rows. This required authority and guile to execute well. When the rows were made and had some more sun in them the next instrument in action, having a medieval look about it and may not have been a general tool, was what we called a ‘buck rake’. One could hardly call this a machine, more a device, as it collected the rowed meadow and by tipping it after say thirty yards it formed a heap which, when done four or five times, provided the material for the advanced stage in the whole process. The ‘buck rake’ was an intimidating device and on an occasion, in the tipping of it, a handle nearly caught me under the chin which would have been a knock-out blow.

If there were enough people for a decent ‘meitheal’ a number of these activities went on in tandem. If the working number was small and when material for a small number of cocks was gathered into a ragged heap, putting this into a cock of hay was the priority. On reflection, I wonder now when the meadow became hay? Perhaps when it was in its cocks.

All the above was straight forward while the gods smiled but when the weather gods saw fit and the rain fell it was a different game. The bane of hay saving was in having a big field of meadow ‘down’ and being dried out and on the brink of the final press of getting into cocks and the rain came! It necessitated the second turn of having it in the right condition to put into cocks again. I had a real dislike of the process of making little cocks called, with us, ‘hand cocks’. There was a problem with semi-dried hay being cocked and descending into a process called ‘heating’ which damaged it to varying degrees. Also, the extra work was a psychological hit. I don’t wish to dwell too much on the negatives as they are water under the bridge in the memory bank.

Making decent cocks was a reasonable skill. We never over-indulged in that like some neighbours did. My father used to say they are not here to stay that long so they got a short lease. In his later years he did certain jobs such as making the hay ropes with me turning the twister which made the rope strong enough to tie down the cock which could be a victim of the wind.

We had meadow in different locations and they each provide different pictures for me now. One was on an upland hill area and it was suggested that on a clear day we could see Croagh Patrick. I was never convinced of that. I used to lie on my back occasionally and feel that I was on the edge of the globe’s surface to such an extent that I would slip off it. Odd but true. This was my mother’s old homestead of Aughtygad. We would have the kettle boiled in her abandoned home. We should have retained that house with the fuchsia colouring the gable end and some rose bushes creeping up in a corner.

In another location, we would actually go to and be welcomed into Delia Leonard’s thatched cottage to have the kettle boiled giving strong ‘tae’ with hairy bacon sandwiches or whatever for lunch though that term was hardly used then. Delia lived with her brother the tailor.

As in the bog the small boxes of Galtee or Calvita cheese were a treat and because it was warm the memorable drink of the hayfield was the flagon of Cidona. We would give it a shake and open the cork and let the fizz propel into the nose.

Off the road to Athleague, we had another ‘long meadow field’ which ended in bottoms as it fringed the Suck river. One late summer with the hay saved as cocks in that field the weather turned bad for a long time and ‘the bottoms’ flooded to such an extent that the cocks looked like the islands in Clew Bay on Reek Sunday.
The final and arduous process in the hay saving was making ‘pikes’ of hay in the outlying land and bringing home the residue to be stored in the lofts or made into a ‘pike’ in the haggard. In the early days, this was done by horse and cart.  A well-crafted load might take five or six cocks of hay. Building this load for public road travel was a real skill with tramping and rope tying and adjustments to avoid slippage. The item of horse harness attire called the ‘breeching’ was important in the role of a brake to control the loaded cart from forcing its speed down a particular hill on the route to home. There the hay-cart was parked under a loft opening and forked into the said loft while someone there forking it back to the sides and back wall. On reflection, the loft work would have required one of those masks that are so much to the fore in these times. In those long days, there would be something like four runs or so from source to loft.

The introduction of the blue and red Fordson Dexta tractor 7249 - on our farm in 1957- changed the pace of all those elements. The horses and the horse machines were side-lined. They are still to be seen, as if in a machinery graveyard, in a small field near farm sheds there today while the Dexta still survives in a hay shed with its age apparent.

Speed was now the mantra though it took decades to arrive at the cut and wrap efficiency of today.

That transformation saw the Weetabix bale, followed by the round bale, the intimidating silage heap with its molasses accelerant, the silage wrapped black bale with ‘Up Roscommon’ emblazoned on it near Fuerty and so on.

The haymaking of yore is now part of folklore and is illustrated through relics of related machines in museums such as Turlough Park near Castlebar and Kennedy’s in North Leitrim or in occasional farmyards reflecting sentimentality for the past.

For me, it was another segment of my youth which I remember with the nostalgia of age.