Monday of next week – March 2nd- will be the first anniversary of the death of Liam Gilmartin at the age of 97. Liam captained the first Roscommon team ever to win an All-Ireland which was the minor team of 1939. I had hoped this would have been noted last September but that was not the case. Anyway I put together the following article on that campaign keeping in mind particularly the role of a great free-taker from Elphin named Joe Tiernan and also Liam Gilmartin 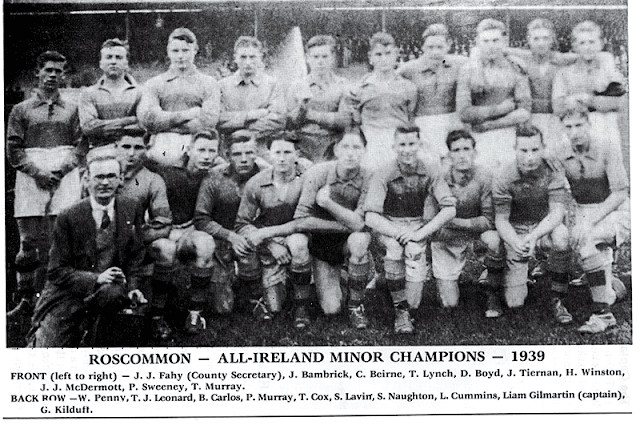 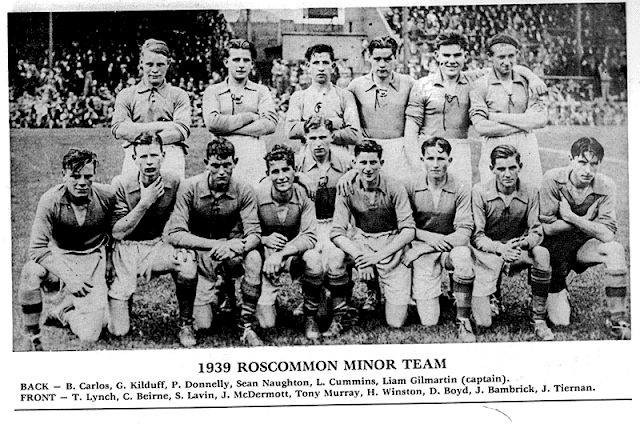 In Europe it was a time of War and tumult but in Roscommon it was a time of sporting excellence and triumph. First came the county minors of ’39. A number of the pieces were coming together then for Roscommon’s great era of success in Gaelic football. Two of them were the administration duo of Dan O’Rourke and John Joe Fahey as Chairman and Secretary of the County Board the second was the establishment of Roscommon Christian Brothers School (C.B.S.) in 1937. Roscommon were concentrating their efforts on their Junior team which got to the All-Ireland Final of ’39 where they were defeated by Dublin by 3 points before a large crowd in Croke Park for the replay of the Kerry v Mayo All-Ireland Semi-Final which Kerry won.
The minors began their campaign in an unheralded first round v Leitrim at Elphin. It has to be borne in mind that collective training for early rounds did not exist and many of the players did not even know many of their playing colleagues apart from the C.B.S. cohort.  Leitrim were favourites as they had defeated reigning All-Ireland champions Galway. However Roscommon defeated Leitrim in a downpour on the score of Roscommon 1.8 Leitrim 1.6. The outstanding feature of the game and indeed of the teams campaign was the indispensable free-taking of Elphin’s Joe Tiernan. In this game he scored 5 points and maybe more as the other scorers are not nominated in the sparse newspaper mention.
In a double-header minor and junior contests at Castlerea on August 6th Roscommon had a good day with both teams winning. Roscommon (minors) 1.11 Mayo 1.3. A Cathal O’Beirne goal sealed the win. Tiernan scored 4 points, Winston & Kilduff 1 point each,  Bambrick 2, Beirne a point with his goal leaving 2 points uncredited. “Lavin and Lynch excelled at midfield, the defence of Carlos, Cummins, Gilmartin and Murray were sound with Donnelly a tower of strength and the forwards Beirne, Bambrick, Winston and Tiernan most effective.
I have not resurrected a really informative account (yet) of the Semi-final which was v Cork. Roscommon won out with 10 points to Cork’s 1.4 in a ‘dour struggle’. Joe Tiernan’s contribution was again pivotal with 6 of the winning total of 10 points.
So a Roscommon minor team had qualified for an All-Ireland final. They underwent a special period of training under former Galway footballer Tom Molloy. Molloy in this period trained senior, junior and minor Roscommon teams. The game took place in Croke Park on Sept. 29 before the senior final of Meath v Kerry. Their opponents in the final, Monaghan, were seen as favourites and they led by 5 points at the break. Monaghan 1.5 Roscommon 0.3. Both teams exchanged points early in the second half but a drought set in for 20 minutes before Roscommon came with a late surge. “Again Tiernan proved the winner”. Monaghan committed a number of fouls which was poor practise with an opposing fee-taker like Tiernan.
With his 9 free kicks he converted 7 one was saved as he ‘went for a goal’ and 1 went narrowly wide. Tom Cox of Boyle had the 9th and insurance point after a strong run from half back. G. Kilduff had the team’s goal.

The win made the front page of The Roscommon Herald of September the 30th with the headline; “Roscommon on the Roll of Honour”.

There is a legend that Joe Tiernan converted all the free kicks he took in those four games. My assessment is that he scored 22 points from his 23 frees. He may have scored more as a number are uncredited. So there is very little wrong in continuing with the legend. He was the Dean Rock of that year.
His total in the 4 games  are as follows; v Leitrim 5/ v Mayo 4/ v Cork 6/ v Monaghan 7…..so that is 22 points in 4 games i.e. 5.5 average. Near 60% of the 38 points scored.

The final team was; S. Naughton/Larry Cummins/ Bill Carlos/ D. Boyd/ P. Sweeney/ Liam Gilmartin Capt./ A. Murray/ S. Lavin/ T. Lynch/ C. O’ Beirne/ J. Tiernan/ J. J. McDermott/ J. Bambrick/ G. Kilduff/ H. Winston. Subs. used to good effect  W. Penny for H. Winston injured and Tom Cox.
Other substitutes as pictured on the day; P. Donnelly (inj.)/ T. J. Leonard/P. Murray while J. Manton/Ml. Bruen and J..J. Nerney are on the programme of the day. (John Joe never really confirmed that he was part of this team). There is a reference to a J. Connaughton in the note on the Connacht final and a slight reference to Eddie McDermott being linked to the panel.

A number of that panel became an integral part of the great senior team of the forties with Cummins, Carlos, Gilmartin, Nerney, Phelim Murray, Des Boyd and Joe Bambrick amongst them.
Roscommon went on to win 2 minor/1 junior/ and 2 All-Ireland senior titles in the 5 years from ’39 to ’43. Michéal O’Callaghan encapsulated all this in his lovely account of those football times for Roscommon titled ‘ 6 Glorious Years’ published in 1944. Had he waited he would have seen the Roscommon senior team contest the ’46 final and replay; and in the Polo Grounds final year the semi-final where they lost to the eventual finalists Cavan.
Anyway it was the Liam Gilmartin captained minors of ’39 ably assisted by the golden boot of Joe Tiernan that laid the foundation for that golden age of Roscommon football.