The Challenge of the Blank Page
I’ve come late to the blog this week and wondered what it would be when I sat down to write something and thus keep oxygen in the series to tide me over. I believe in the ‘consistency’ of being there.
As a colleague/friend/ someone I know used to say; ‘We eat at one, dinner or no dinner!’ So like a rare swimmer near a cold pool I’ve walked around the laptop a few times and exchanged stares and as you can see the game is on…..
Then I was reminded of the challenge as enunciated by W.B. Yeats and copy and paste to here;

“The Circus Animals’ Desertion
BY WILLIAM BUTLER YEATS
I sought a theme and sought for it in vain,
I sought it daily for six weeks or so.
Maybe at last being but a broken man
I must be satisfied with my heart, …….

(Ending)
Now that my ladder's gone
I must lie down where all the ladders start
In the foul rag and bone shop of the heart”.

Halloween Trick or Treat
Halloween or Hallowe'en, a contraction of All Hallows' Evening or Eve, or All Saints' Eve, is a celebration observed in a number of countries on the 31st of October, the eve of the Western Christian feast of All Hallows' Day.
It is thought to have originated with the ancient Celtic festival of Samhain, when people would light bonfires and wear costumes to ward off roaming ghosts and so on.

Some Traditions
When we were young, decades ago, there was a real night of activity and challenges which we entered with gusto. The most memorable was trying to get a mouthful of an apple lying in a basin of water. A variation on this was trying to do likewise to the apple as it hung from a height.
Then there were items hidden in food such as the ring in the a cake or barmbrack which I always called a ‘barnbrack’. A young person was blindfolded and the items were laid on saucers or polish lids and shuffled around like a three card trick and then the person would dip.  A person's future would be foretold by the item they happened to find; for example a ring meant marriage, a thimble indicated remaining single, a coin meant wealth and the more macabre ‘clay’ stood for death.
Today one of the symbols, particularly in the States, is the pumpkin which is pretty new in our domain where it once was the turnip. While the tradition of St. Stephen’s Day wren boys going from house to house singing or playing music seems to be dying the Halloween tradition of ‘trick or treating’ looks strong. I remember that Halloween took on a destructive twist with young men, in the deep night, causing damage to cabbage plots and by removing gates and such actions. I know not what the symbolism of those latter acts were.
Also at Halloween there seemed to be a culture of ghosts and scary story telling. The scares were either imagined or deliberate pranks played by older people on kids sometimes fuelled by the spirits!

(As  a digression; one of the most brutal shootings in Northern Ireland called The Greysteel massacre happened on the evening of 30 October 1993 in Derry.  Three members of the UDA, a loyalist paramilitary group, opened fire in a crowded pub during a Halloween party, killing eight civilians and wounding thirteen. One of the gunmen called out immediately before the shooting ‘trick or treat’. The pub was in an Catholic nationalist area and was seen as a reprisal for a previous I.R.A. attack.)

In England the tradition is, to a large degree, submerged by Guy Fawkes night on November the 5th which remembers the attempt to blow up the Houses of Parliament in the early 1600s’. It is commemorated by bonfires and fireworks and the burning of an effigy of Guy Fawkes who was involved in the original ‘Gunpowder Plot’.
Down the years there has been issues with dangerous fireworks causing injury to young people. These fireworks have become more regulated in recent times and are not as prevalent as heretofore. Elderly residents too can be victims of thoughtlessness. So have fun but take care of yourself. 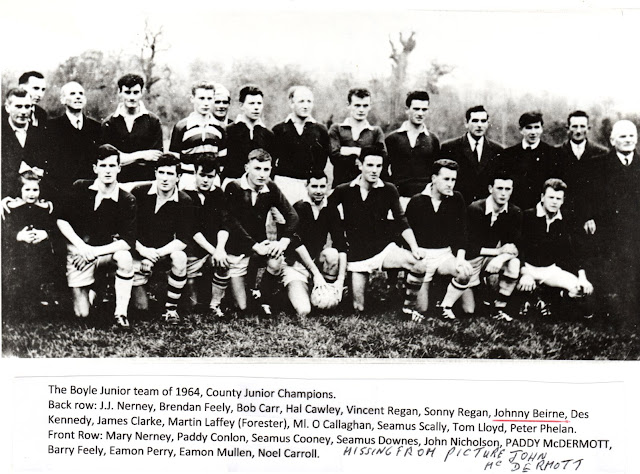 Last week I mentioned the deaths of three people and the grim reaper continues his work. Johnny Beirne was laid to rest today (Thursday) in Assylinn graveyard. I would not pretend to have known Johnny very well but I was familiar with him and our paths crossed from time to time, sometimes in a local tavern. He was a member of the Boyle Junior team (there were only senior and junior grades then)that won the 1964 Championship when, in the final, they defeated Rahara, from beside Knockcroghery. They had played six games in that campaign including Killina. In a brief few words with Hal Cawley outside the church on Wednesday evening he told me of a vital score by Johnny after a solo run through a dogged Killina defence which helped Boyle to a win in that game. I called to Johnny some time ago returning an old significant Roscommon medal I felt one of the lads had brought into school for me to see, years ago. It had gotten ‘submerged’ with me afterwards. Anyway I had a very pleasant chat with Johnny on that occasion. I used also see him on Tonroe Bog and he saying to me once ‘it’s a pity we can’t bring the fireplace out to the bog’. With these few words and the picture of that ’64 team (above) I tip my cap with respect to Johnny Beirne. 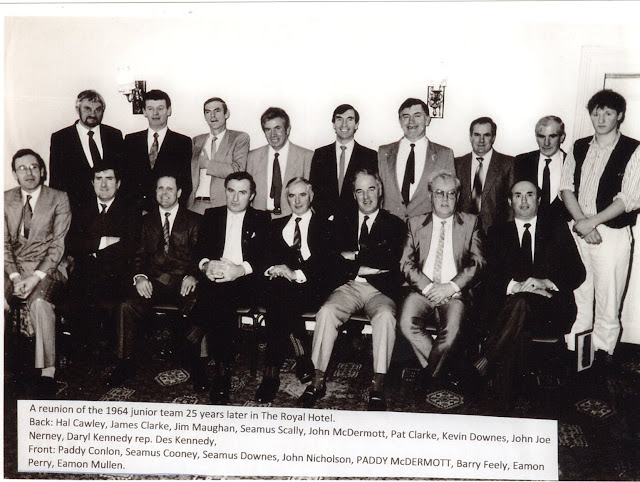 Frank Dennehy R.I.P.
Frank Dennehy, one of Roscommon’s finest servants of recent times, was laid to rest in Elphin on Tuesday. Frank came from St. Brigid’s country in South Roscommon. After secondary school in Summerhill he spent some time in England and returned to North Roscommon. He became inextricably linked with Kilmore GAA Club and was a great servant of that club in many ways. He graduated to the Roscommon County Board and was County Secretary for a period and President on his death. He was hugely popular and respected by all. Apart from the GAA he was manager of Elphin Credit Union. Frank was one of the great community contributors and did it all with grace and humour which were his gifts. He will be sadly missed by a wide circle of family, friends, the Roscommon GAA community and the many people who were touched by his understanding and generosity.

The World Series-Baseball
As a student I spent three summers in the U.S. In 1968 I caught the baseball bug. It was the year a team called the New York Mets-then based at Shea Stadium-not alone won their league but went on to win what they refer to as The World Series. This is the Holy Grail of the game. What was amazing about their win was that they came from nowhere, the basement to the very top like Leicester in English soccer this year. Subsequently they were referred to as ‘The Amazing Mets’. I had a book once on that campaign. It may have been called ‘The Year the Mets Lost Last Place’. I still remember the names of some of the players; Jones, Seaver, Koosman and a manager called Yogi Berra.
Anyway the two teams contesting the World Series at the moment are The Chicago Cubs and The Cleveland Indians. It is the best of seven games. In the first game, on Tuesday night, ‘The Indians’ got off to a great start with 3 runs and ran out winners by 6 to 0. The Cubs have not been to this level since the forties and not won since 1908. It was similar in Boston until a breakthrough win a short few years ago. Were the Cubs to win it would release a pent-up emotion in that city that would relegate the Leicester story to the ordinary. However losing the first game does not bode well for them.
Since I don’t have Sky etc. I’ll have to follow it on a lap-top twitter source. It will be a long night but I guess it would be more my thing than Trump v Clinton. Baseball in my opinion is the quintessential l United States game as Cricket is in England and hurling is in this country. They display, in a way, the soul of each country.

Club Players’ Association
It was inevitable that an organisation would emerge that pays attention to the ‘ordinary’ Gaelic players throughout the country. It is generally felt by those players that they are being treated abysmally. They start training shortly after Christmas or even before. Then a league begins and in Roscommon’s case their ‘county players’ are allowed to play in nominated games. Very kind. Then when the Championship starts there is often one game like a lost flower in May and then the remainder when the ‘county team’ are eliminated from the championship which despite a paucity of games even at that level can be late July. Even at that all the county finals took place around Mid-October. The weather has been more than kind this year but that is exceptional. There has been much talk about player wellbeing and welfare in recent years and everybody subscribes to this orally. Yet little changes. The GPA’s brief has unashamedly being the inter-county payers and they have managed to get a generous stipend from the GAA nationally which is questionable.
If one wants a stark example of how ‘ordinary’ club players are treated one has only to consider the way the Kilmore Intermediate team and club were treated last week-end when they were forced to play Monivea in the Connacht Club Intermediate Championship less than 24 hours after their win in the intermediate replay on Saturday. Also news of the death of their Club President, Frank Dennehy, had also emerged. This is outlined in a very strong statement from the club extracts from which can be seen on page 63 of this week’s Roscommon People. Kilmore have formed the first local branch of the new CPA (Club Players Association). I imagine I will be returning to this theme.
Congratulations To
• Dessie Carlos of Ballinameen was a key member of the Castleknock Senior GAA team who defeated St. Jude’s in the Dublin County Semi-Final on Thursday evening. On Newstalk Sport, Dessie was nominated as ‘Man of the Match’ in the game and obviously will now feature in Dublin county final.  Dessie, a former St. Mary’s College student, has been a familiar and valued  member of Boyle Celtic in recent years.

• Congratulations to Jonathan Conroy who managed Creggs to their Junior Championship victory on Saturday evening last over Kilglass Gaels. Johnathan was one the finest players of Boyle teams for years and represented Roscommon seniors in goals a number of times. He was also a hugely popular coach to a number of teams in Boyle before he migrated to Mid-Roscommon East Galway. He is a gentleman and held in high regard in Boyle GAA and I am sure now in Creggs. I can see from Frank Brandon’s commentary in this week’s Roscommon People that they celebrated with gusto. I know Creggs and celebrating in Mikeen’s is one of the things they do better than most, maybe even more so than Kilmore.