The poems of Yeats final reference

‘Although I can see him still,
The freckled man who goes
To a grey place on a hill
In grey Connemara clothes
At dawn to cast his flies’
This is the idealised Irishman but Yeats finally gives up on this with;
‘A man who does not exist
A man who is but a dream’
‘Sailing to Byzantium’ starts with a line that has regularly been adapted to other connotations;
‘That is no country for old men’ (The ‘That’ standing for Ireland)
The second verse has an evocative picture of;
‘An aged man is but a paltry thing
A tattered coat upon a stick,’
In ‘Among School Children he focuses on himself as that senior man amongst the young
‘I walk through the long schoolroom questioning
……A sixty-year –old smiling public man’
An earlier poem ‘An Irish Airman Foresees His Death’ relates a truth rarely referenced, war as an adventure of sorts, a heightened life experience;
‘I know that I shall meet my fate
Somewhere among the clouds above;
Those that I fight I do not hate
Those that I guard I do not love’
This poem is quoted fully in a war film depicting an American bomber plane of the Second World War called ‘The Memphis Belle’. Crews were required to do twenty five sorties over Germany and afterwards be re-assigned to less onerous duties enhancing survival. The film focuses especially on the crew’s twenty fifth bombing flight.
Leonard Cohen at a magical concert at Lissadell House in the summer of 2010 quoted the opening lines of ‘In Memory Of Eva Gore-Booth and her sister Countess Markievicz’
‘The light of evening, Lissadell,
Great windows open to the south
Two girls in silk kimonos, both
Beautiful, one a gazelle’
Unlike many artists the power in the poetry of Yeats does not diminish with age as seen in his valedictory poem dated September 1938 ‘Under Bare Bulben’.The famous lines ordained by him to  be carved on his tombstone in Drumcliff come from the final lines of the final verse six
VI
Under bare Ben Bulben's head
In Drumcliff churchyard Yeats is laid,
An ancestor was rector there
Long years ago; a church stands near,
By the road an ancient Cross.
No marble, no conventional phrase,
On limestone quarried near the spot
By his command these words are cut:

Cast a cold eye
On life, on death.
Horseman, pass by!

While summers past have given us many great Gaelic games especially hurling in the current season to date there has hardly been a decent game in either code.
Like all Roscommon supporters I have watched the progress of Fermanagh especially. It was interesting that they avoided the anticipated slaughter by Dublin. They actually played as if they were enjoying themselves!

This was in stark contrast to the performance of Kildare who were abysmal. It will take some time to live down this defeat. Kerry looked awesome winning on the record score of Kerry 7.16 Kildare 0.10.Few if anyone can run at a defence with the menace of Darren O’Sullivan. For him and the Gooch & co. it was a hot knife through butter. Kerry now play the winners of Monaghan v Tyrone in the semi-final. Kerry must now firm favourites to retain their crown irrespective of Dublin's claims.
I imagine the proud followers of Cork in both codes will be pretty shattered by the performances of their teams a couple of weeks ago. The managerial position of even the legendary Barry- Murphy must now be in jeopardy.

I see that the Roscommon manager John Evans has been meeting with the top officers of the County Board and the suggestion is that John Evans will be manager for next year.  While there has been a considerable amount of progress with the league promotions it is in the championship that the real stature of a team is tested. In two of the three championship games Roscommon did not do themselves justice. Even in the Cavan game and it has to be acknowledged that Cavan were not a top side it took a long time to finally put a fourteen-man team to the sword. There were, in the eyes of many supporters, quite a few mistakes made by the management which frustrated many supporters. While Roscommon have a large number of very good young players there are significant positional deficits in the panel. While Mayo steam-rolled Sligo there is not any optimism now (there may have earlier in the summer) that Roscommon would have done a lot better.

The climb of Croagh Patrick was officially called off at the 11th hour. This was the first time that this has happened since 1951. Some Mayo people are seeing it as a sign of hope for their footballers, since 1951 was the last time Mayo won the senior All-Ireland.

The remaining football championship fixtures are as follows:
1.       Saturday next August 8th the two remaining quarter finals are Monaghan v Tyrone and Donegal v Mayo.
2.       Sun. 9th All-Ireland hurling semi-final, Kilkenny v Waterford 3.30.
3.       Sun. 16th ibid Galway v Tipp.
4.       Sun. 23rd Dublin footballers versus the winners of Donegal v Mayo.
5.       Sun. 30th Kerry versus the winners of Monaghan v Tyrone.
(For Mayo/Donegal  to win an All-Ireland from here they will have to beat Donegal/Mayo, Dublin and most likely Kerry. If they do they will deserve an All-Ireland).
Boyle GAA

Boyle Senior footballers play Kilmore in Stokestown at 4 on Sunday next, August the 9th , in the third round of the senior championship. To date they have lost to Castlerea and beaten Elphin. (The team had a good win againover Elphin on Saturday last in the league which puts them in contention for a play-off spot in that competition).
For the following week-ends of August, Boyle play, St. Croan’s in the Hyde and Strokestown in the senior championship. 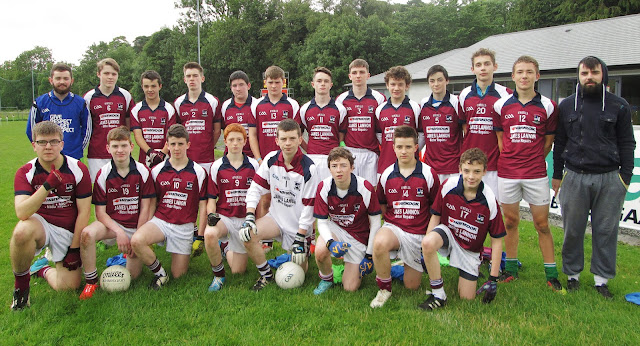 While I know a good few of the U 16 team I do not know them all so someone might forward the names to me at; tconboy1@eircom.net

I was at a great if heart-breaking game for Roscommon U 16 Girls team against Waterford at Nenagh on Wednesday the 5th of last week, in the ‘B’ All-Ireland Football Final. It was a heartbreak because Roscommon lost by just one point, Waterford 2.9 Roscommon 3.5, in a game in which skill, dash, courage and drama abounded. Waterford started as if they were going to steam-roll Roscommon and led by ten point at one stage but the Roscommon girls fought back and at half-time the score stood at Waterford 2.7 Roscommon 2.1. Roscommon dominated most of the second half and got a goal two minutes from time to leave just a point between the sides but Roscommon could not get the equalising point to bring the game to extra time. It was a tremendous effort from a gallant team who deserved better. Roisin Wynne of Boyle was just terrific in her defending duties.  Michael O’Brien of the Roscommon Herald stated at the end of his report this week that; “It was the greatest underage ladies’ game of football that this reporter has ever witnessed”.

If people had any optimism in the Public Accounts Committee’s Enquiry into the Banking Collapse it has been greatly eroded. The performances of Neary, Hurley, Cowan, Ahearn, McCreevey and so on reminds me of an attitude adopted by some in going to confession. A little suggestion of contrition –though that act is not easy to remember after all this time- salving of the conscience a wee bit and then it is a rub of the hands and one more spin on the merry go-round. Now where is the merry-go-round?

On Tom McGurk’s Late Review on TV 3 recently the attitude of the top people in PTSB with regard to mortgages, the way they treated customers and their choreographed explanations came under severe criticism. Apparently the PTSB is a fully state-owned entity but Minister Noonan is not able to exact appropriate influence on its procedures and attitudes. The chorographers, including the legal eagles and the public relations whizz kids rule. There was a telling picture in The Irish Times of CEO of the Irish PTSB, Jeremy Masding, at his press conference with the words, ‘Serious/Controlled/No smile’ directions on top of his presentation notes as he stated ‘We apologise unreservedly to all impacted customers’. How depressing it all is and how devastating it is for those caught up in its machinations. ‘Impacted’ has an appropriate onomatopoeic ring to it.
Three banking people were found guilty last week for some cover up for their superiors ‘upstairs’ while those from ‘upstairs’ were nowhere to be seen.

(Letter to, 'The Irish Times' doing the rounds on ‘social media’)
Sir-If they do exhume the bones at Drumcliffe churchyard, I hope they don’t get the nasty surprise I did in my Leaving Cert. when I was expecting Yeats and Kavanagh came up instead.