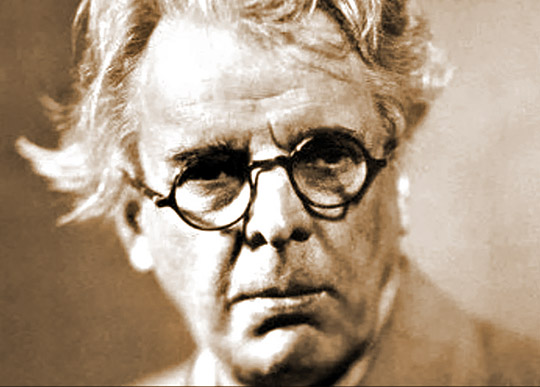 Some time ago I was asked if Seamus Heaney would be quoted as regularly as W.B. Yeats or provide the lines that some people never forget from the poetry they learn at school or wherever. My answer was that it would take some time to see what impact the poetry of Seamus Heaney had in that respect.

In all this I do not pretend to be any authority, far from it. I presume the greatest number of quotations from the written word are from the bard himself William Shakespeare. Perhaps The Bible is also a contender. In Irish literature Oscar Wilde is a leader in the quick witted responses that one might have hoped to be able to give oneself. In poetry it has to be William Butler Yeats born in Sandymount, Dublin in 1865 and died in 1939 in southern France. His remains were returned to Ireland in 1948 and buried in Drumcliffe graveyard as Yeats himself had stipulated.
This is his 150th Anniversary Year of his birth and Sligo is alive all summer long with a celebration of his anniversary with lectures, seminars and poetry readings run by the annual Yeats International Summer School (July 26 to August 7). ‘The Blue Raincoat Theatre’ company has pulled together 26 productions of Yeats’ plays to be performed outdoors on the mountains and beaches which inspired him. It is written that his aims were to write for an Irish audience and about Ireland, to re-create a specifically Irish literature in English. In doing this he explored such themes as Irish Myths and Legends; Love ‘lost as well as won’ in all its hues and later other themes.

Returning to quotations from over a dozen collections  one of the early poems is ‘The Stolen Child’ beginning;
‘Where dips the rocky highland..’ with the refrain ‘For the world’s  more full of weeping than you can understand’.

Down by the Salley Gardens is close to the top of his best known and loved poems. It is of course a powerful song of lost love ending with;
‘But I was young and foolish, and now am full of tears’.

I will abandon the idea of which of his poems is better known  or recognised with a prime contender;
‘The Lake Isle of Innisfree’ opening with the line;
‘I will arise and go now, and go to Innisfree’. It is a powerful series of pictures of a fairly simple feature in Lough Gill.

A little oddly, for an early collection, he writes a powerful love poem ‘When You Are Old’ opening
‘When you are old and grey and full of sleep
And nodding by the fire, take down this book,
And slowly read, and dream of the soft look
Your eyes had once, and of their shadows deep;

(I’ll return to William Butler next week since I have to get my thoughts together more since this little writing idea is getting more entwined and running away from me).

Roscommon overcame Cavan at historic Breffni Park on Saturday evening to advance in the championship. They now meet Fermanagh in Brewster Park, Enniskillen on Sunday next at 3.30. It was a very good all-round performance from Roscommon on Saturday with a number of stand-out performances. While against Sligo it was difficult to nominate anyone who had a good game, here it was difficult to see anyone who played badly. I have to say that Cavan were poor especially after they had the man sent off at half time. While we in Roscommon have had our lean periods we have put our heads up from time to time. Cavan with a more illustrious history than ours have really wallowed for decades and  may not have been in an All-Ireland semi-final since Roscommon beat them in ’62. Seeing the sign Mullahoran on the way home reminded me of Cavan’s great history as that club with Cornafean were to Cavan what Tarmon and St. Patrick’s Knockcroghery were to Roscommon in the forties.

At half time one could say it was nearly fifty- fifty but as the second half progressed Roscommon looked comfortable winners from a fair bit out. The game was finally wrapped up by a second goal from Enda Smith which put him in the frame for ‘Man of the Match’ –which RTE had already decided- with a sterling second half performance. Cathal Cregg got the R.T.E. ‘Man of the Match’ while Ultan Harney and young Daly were other contenders.
I felt it was a mistake to introduce Cian Murtagh who had to come off against Sligo with a hamstring injury which he ‘tweaked’ again in Cavan. I have been to Brewster Park before. It is a nice venue and an interesting date to be there.

Roscommon have a strength in depth especially in the forward line where Donie Smith must be near a starting place.. John Evans and team must be pleased with the response of the team especially having received the jolt of the early Cavan goal. While the manager said somewhere that is was good to be able to answer the critics especially in the media or some such. There will always be critics and Sligo was such a shock to nearly everyone that comment which could be seen as criticism was inevitable. 'Audi alteram parte' as the Roscommon Herald’s motto goes.

If one might suggest that the senior team management be more circumspect with his comments then the minor management and team came and went with little fuss. I had forgotten the Championship game versus Sligo was actually on last Friday evening so meagre was the pre-match comment on it. (Reporters often thank people at grounds they are reporting from for refreshments provided I will do so also thanking Helen Finn for her hospitality in Butlersbridge on Saturday afternoon)

Cork and their manager have been getting rea criticism. That they did not manage to see out the game against Kerry  was a big blow to them and it will be a real test to see if they can win the replay in Killarney.

I was at the Leinster hurling final between Kilkenny and Galway in Croke Park. The question before hand was; ‘Which Galway would turn up?’. Actually it was a mixture. Kilkenny turned up as they nearly always do and won comfortably in the end. Despite the retirement of so many great players they are still a formidable outfit and are led now by T.J. Reid and Richie Hogan. Galway were not close enough because they lacked the control and ‘touch’ i.e. the skill set of the opposition. Joe Canning though produced one of the hurling moments of the year with a sublime piece of skill for majestic goal. They say that the conveyor belt in Kilkenny is not what it was but their team also won the minor championship scoring four points in the dying minutes to win by two over Dublin who looked like winners three minutes from time. Their U 21s’ suffered a big defeat to an emerging Wexford last night.

It is one of the sights of the summer to witness the Abbey Park occupied by scores of youngsters participating in the Kellogg’s Cul Camp or the blitzes which occur there from time to time. Peter Carney who with Willie Hegarty oversees the Cul Camps told me that the numbers in Boyle were never higher and this year there were 138 kids involved with 8 team coaches. At the beginning Boyle would have had between 30 and 40 kids. Of course Boyle with its fine dressing room facilities is an ideal venue. the work that the above gentlemen do is to be commended.

Issues of the Moment
I see that NAMA is once again in the spotlight. While I would not have the competence to comment on this elephant in the room it seems to be a hugely controversial organisation. They were very quick, along with Minister Ring, to try and bat down Colm O’Rourke’s criticism regarding the sale of a property in South Dublin in which the Dublin GAA was interested. It seems as if Mick Wallace has opened another more serious front for them now. Whatever happened to the Sitserv issue of a short time back?
I thought I might mention the performances of Charlie McCreevy, Brian Cowan, Patrick Neary the former Regulator !, and John Hurley the former Governor of the Central Bank.

Best Wishes To a Regular Reader
Best wishes to Carline O’B….who keeps an eye on the health standards in West Derby near Liverpool. We hope your daughter Emer gets the results she deserves in her GCSE or is it GCES? Anyway Caroline we had a good evening in Cavan though E. was in a different Frame of mind. The forward planning hadn’t allowed for a Sligo hiccup.