It seems as if we are going to have the full range of emotions called into play as we watch, observe or take on board this summer’s GAA Championships. Perhaps once again the hurling will easily trump the football for quality as it invariably does. Galway exploded against Dublin the Leinster Championship replay and the game was decided very early as a consequence of the three goal fest by Cathal Mannion. I have said often that, like so many neutrals, I would love to see Dublin win an All-Ireland hurling as it would tick a number of GAA boxes and be such a boost for the great game of hurling. While Galway looked good their problem is consistency and the challenge now is to put a series of performances together that will show that they are serious contenders for honours.


While one has to be pleased for Laois with their long awaited win over Offaly a person has to feel sorry for the decline of Offaly on both the hurling and football fronts. Also the hurt that this generates was evident in the demeanour of Offaly manager and former hurling great Brian Whelehan.
Laois now meet Galway so that will be a real test as to their quality or otherwise. Wexford were too good for what we thought were an emerging Westmeath. Wexford now play Kilkenny in Kilkenny in a traditional Leinster Championship battle. Kilkenny are restructuring after the loss of some of their superstars. Still there are a lot of very recognisable names on the Kilkenny panel and it will be interesting to see if Brian Coady can shape another powerful team. It is said in many places that the quality is a bit below par in Kilkenny at the moment but that has a habit of being an illusion.
It was great to see Waterford reach the Munster Final where they will play the winners of Tipp. and Limerick. It continues the idea that any one of say of about seven can win the All-Ireland hurling Championship. The rise of Kerry hurling too is interesting. In football there seems to be but three real contenders; Dublin, Kerry or Donegal.

For me the sporting moment of the week-end was at the end of the Nicky Rackard Cup final in Croke on Saturday between Roscommon and Armagh. Armagh had been leading for most of the game and in the last seconds were two points up when Roscommon were awarded a free-not a penalty- from around 25 metres out. Up stepped Micheal Kelly, Roscommon’s captain, who fired a rocket of a shot to the net through a forest of Armagh hurleys to give Roscommon an unlikely win. I wrote once about a Roscommon win versus Laois in the All-Ireland Football Semi-Final of 1946 as follows; “If Roscommon has had many unlucky days at Croke Park this was not one of them”. So it could be said of last Saturday. For the small tight-net hurling community of mid Roscommon it was a deserved boost to their efforts. It is a slight regret of mine that I did not try to promote hurling in Boyle when I came to the town first in the early seventies. A legendary man by the name of Bob Carr –from Laois- had done a good deal of work with its promotion in the county and some in Boyle. This was continued by Limerick and Munster hurler, the army officer P.J.Keane now resident in Sligo. There were a few very good young hurlers in Boyle under his tutelage including Martin Candon and T.P. Toolan. I suppose the challenge of keeping the football going was enough as dual clubs create their own demands and issues.

This week-end Boyle play Padraig Pearse's in the O’Rourke Cup in Boyle. I looked at the club’s Facebook site for a time for this but there was no reference to it. I presume there is an arrangement with Pearse’s regarding county players as I would imagine that John Evans would not be letting county players play this type of game a week before the key championship fixture against Sligo.
Also on Sunday morning there is an under the U 12s’ (second team) play Pearse’s in a Division 5 League. In my time ‘coaching’ and later following club football this was the area I could enjoy most where enthusiasm and commitment is unbounded.

Barcelona and Juventus Champagne Soccer versus Blatter’s Circus
The beautiful game was hugely evident in the Champions League Final between Barcelona and Juventus. The skills of the many great players in the Barcelona team flowed like champagne. The three front players of Messi, Neymar and Suarez, a potent mixture of talent, now pose a log-term threat of dominating football in Spain with a phenomenal scoring record this past season. The conductor of this classic team is Andres Iniesta.
It is just as well that football is a simple game and can occupy a parallel universe to the machinations of its administrators. It has taken a long time to bring the searchlight effectively on Sepp Blatter, the circus ringmaster, but it seems as if the Americans oddly enough have done the deed as they have done before in say the Lance Armstrong affair. Then with great Irish assistance from David Walsh. This time though just when the Secretary of the Irish Association, John Delaney, was crowing and seemed to occupy the ‘high moral ground’ along came the fact that he had accepted the princely sum of €5m for the Association in compensation for a piece of smug satire regarding Ireland wanting to be the 33rd team at the African World Cup by Blatter. While this was pretty ridiculous it pales when compared to Qatar getting the hosting of the World Cup. So the rug was pulled from under the display of Irish righteousness. This all had the effect of prompting the Taoisech Enda Kenny to comment on the football situation while he seemed mute about the very serious issue of IBRC, Siteserve and Dennis O’Brien’s ‘power and influence’ ascendancy. The real star of the moment is Catherine Murphy T.D.
If the Champions League Final was champagne the Ireland versus England game was at the other end of the spectrum and not for the first time. Next Saturday Ireland plays Scotland in what one expects to be a close encounter of hopefully a more dramatic nature. 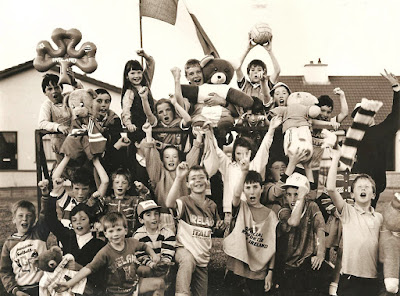 Italia ’90 was one of the memorable periods in Irish sporting history. For a couple of week the Irish sporting public were engrossed in the happenings of the Irish soccer team in Italy for the1990 World Cup. The fact that the team scored just 2 goals, I think, from play was submerged in the national euphoria. One of the great subsequent headlines was:


‘I missed Italia ’90 I was in Italy’.
I use here one of my favourite pictures and it is of the Forest View ‘gang’ of that time in celebratory mood after the Romania penalty shoot-out. The picture was taken by Christy Regan. I have all the names but the two people on the right obscured by the flag. One is a girl with a ‘Fair Isle’ type cardigan and the other a teenage boy. If anyone can come up with their names then I have the complete set.

You may not be aware of the fact that there is a Soccer World Cup in progress in Canada right now. It is the ladies who now take centre stage.


Last summer I really enjoyed the festival of soccer that was the men’s Soccer World Cup in Brazil with some amazing performances, exultation and heartache, new stars and old reliables,  the destruction of Brazil and one of the traditional winners, Germany,  going home with the  spoils.
Monday night saw the beginning of the Women’s’ World Cup with an interesting game between one of the powerhouses of the game, Sweden, against Nigeria. It ended in a 2 all draw and those involved with Nigeria were hugely pleased. This is the first African team to make an impression on the game at this level.
The second game saw a great United States side who are two times winners and one of the favourites once again grind down Australia to win by 3 goals to 1. The reigning champions are Japan while other top teams include Brazil, France, England, Canada, Norway and of course Germany.
While the coverage on BBC 2 is patchy I imagine the business end of the competition will be as exciting as ever.