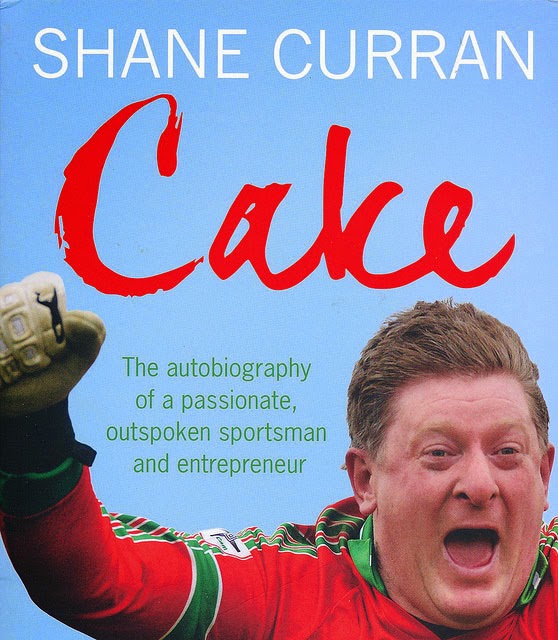 I have just finished the biography of Shane ‘Cake’ Curran. I am not really calling it autobiography because I detect a good deal of the influence of the ‘Ghost’ writer Tommy Conlon who formerly worked at The Roscommon Herald. Now I seem to detect a certain dismissive attitude to this book perhaps a snobbishness because of the extrovert character of Shane Curran but I recommend it especially for Roscommon GAA players and followers. We know the context of it, we were at many of the games referred to and we have been aware of Shane for a long time. It is a certain ‘warts and all’ outline of his experiences in Roscommon football and at times somewhat crude.  Some people will be offended but while one might speculate on who they are it is not generally obvious. Anyway that is not the essence of the book.
Shane burst into the consciousness of the Roscommon GAA community with the taking of a penalty in a minor game in 1989. He naturally talks fondly of his home town of Castlerea and the influences it had on him which all seem to be good with frequent references to his family. He various periods of employment also come in for attention. His account of his  time with Athlone Town soccer team shows how down at heal and bleak that ‘professional’ game was.
Through it all he county football career fluctuated and he celebrates the All-Ireland Junior win in 2000 over Kerry in Nenagh. We are treated to the inside track of the great campaign of 2003  especially those hectic encounters with Offaly in Mullingar and Kildare in Portlaoise and rightly rails against the exclusion of Frankie Dolan from winning an All-Star award and to his own exclusion from the Ireland team to visit Australia. 2004 saw Curran again in the central spotlight in Sligo when he scored a penalty and a mighty free.   It all culminates in the great victory of St. Brigid’s in the All-Ireland Club Final of 2012. Shane obviously revels in Chris O’Dowd’s description of him as coming ‘from that great dramatic tradition of out-of-your box crazy goalkeepers……he was gangbusters’.
Naturally many concerns regarding games management feature  with a mix of frustration and sympathy.  These include the performances of referees and umpires especially those who are bespectacled! He balances this a bit by saying ’Referees and umpires didn’t know what to make of me a lot of the time either’! He has a strong and interesting perspective on club loyalty and the its future. Shane joins the growing chorus against talented players being required to play for so much and the huge pressures that are involved.
This book may not be the establishment’s cup of tea but as the proverb says ‘where everybody thinks alike nobody thinks too much’. As I said I recommend Shane’s book. It is an interesting, rarely dull and important contribution to a players perspective of the game in Roscommon.


What it Says in the Newspaper


The most consistent paper of record for the Roscommon region has been The Roscommon Herald with honourable contributions from a number of others.  While the whole media scene is changing radically and the printed paper is under severe pressure the hard copy Roscommon Herald is a constant for me. Micheal O’Callaghan was its outstanding editor from the forties to the eighties while it is currently in the safe hands of Castlerea native Christine McHugh. Looking at this week’s copy for instance I empathised with a number of issues covered. The first one, basically dealing with the concerns of Labour Senator John Kelly, is headlined ‘Elderly getting ‘raw deal’ not ‘fair deal’ on page nine. I know a little bit about this and I can only endorse the sentiments expressed. I will not go into the detail here only to say that the hoops and delays involved  by people have to go to arrive at this ‘deal’ puts grave pressure on the word ‘fair’.
On page ten there is reference to Urgent Care Unit at Roscommon Hospital. I have been through a few hospitals in recent times and have referred to the huge congestion problems at University College Galway. I have experienced this Roscommon Hospital care Unit recently and can say that it was a revelation in terms of care, courtesy, consideration, environment and professionalism. One is regularly so stressed by hospital experience that they are unforgiving experiences but my visit to Roscommon was as it should be therapeutic.
The third item referred to-on page eighteen- refers to the connectivity ( a new buzz word, Shannon airport and all that) between Boyle and Roscommon town. As someone who has travelled that road so often the same idea had engaged me from time to time. I do not know what the uptake would be and the economics of it but a bus route from Sligo to Athlone seems to have a good deal of merit. I seem to remember that this existed in the past, perhaps the distant past. I will take advisement on that.


Roscommon play Cavan in Kiltoom on Sunday next in the first game of this year’s National League in Division Two. Roscommon having won the F.B.D. with victories over Galway and Mayo. In winning the F.B.D. the status of Leitrim did not rise to levels of great threat in Connacht. So we shouldn’t give a gold cup status to the humble looking F.B.D. Cup that we certainly denied it when won by another county. Still the performance against Galway and the goal scoring especially in that game is very positive.  Being in the Final of the U 21 Hastings Cup on Saturday  adds to the buzz around expectations for the coming year. Can Roscommon supporters dare to dream? Of course every year we start with our dreams and that is what the beginning of each GAA year is about. What would be realistic for this year? Well, consolidation in Division Two  is a core value in senior league. Also, with the championship draw, a good whack in a Connacht final appearance could be on the cards. My own real hopes are with the U 21 side. Roscommon has, for me, a wealth of talent at under 21 at the present time so perhaps a  run in that could go a long way again. Of course as a team goes up the ladder the standards are higher and chinks which were not obvious earlier may emerge. A great factor for us in Boyle GAA is that we are going to have a really vested interest in watching Donie, Enda, Evan and Tadgh through these campaigns. Let the games begin.
Congratulations to St. Croan’s on their All-Ireland Semi-Final victory over Louth’s Sean O’Mahoney’s. To be going to Croke Park for a final with your club team is such a dream come through. I was asked recently about favourite sports books and one that echoes the St. Croan’s odyssey  is ‘The Miracle of Castel di Sangro’, by Joe McGinniss which followed a small team’s dream. I did that with Fuerty last year. This is the third year for a Roscommon team to be in a club All-Ireland Final with St. Brigid’s there in 2013 at Senior and Fuerty in 2014 at Junior and this year St. Croan’s at Intermediate. There is another book, on small town American football, called ‘Friday Night Lights’ which covers a similar journey. I wonder has St. Croans done anything significant to record their epic road to Croker journey? The game taking place on February the 14, St. Valentine’s Day begs something special.  Congratulations to David Casey on his contribution to the odyssey of St. Croan's.
There is a wealth of sport this weekend including the great extravaganza in the U.S. of the ‘Super Bowl’ where the Seattle Sea Hawks, with quarter-back Russell Wilson , face The New England Patriots with Tom Brady. I have watched a number of the games in the lead up to the final and amazingly some come down to the very last seconds. If one can cope with the interminable advertisement outages and the journey into the night it is great event.


The picture of Ray Burke on the sidebar of the front page of The Sunday Independent with the caption ‘I’m glad justice was done’ was reassuring! It is hard to keep a good man down! Underneath was a picture of Michael Lowry with his ‘lovely girl’ comment. Of course another good man rose from the travails of the beef tribunal.
I have only glanced at the recent RTE review of the happenings with the former businesses of Sean Quinn but will get back to it. Another phoenix from the ashes seems in prospect !
The final test of our rehabilitative forgiveness now would be to give some real public financial position to Sean Fitzpatrick. As Portia, in disguise, says in The Merchant of Venice; ‘The quality of mercy is not strained…..’ Her listener was Shylock.
Perhaps I should overcome my reservations about watching Gay Byrne’s series ‘The Meaning of Life’.