The Long War in Palestine

As I write, the news is reporting an Israeli attack on a U.N. school in Gaza in its war against the Hamas organisation. There are reports of the deaths of 19 people including many children as a consequence. One always has in the mind the journey of the Jewish people to where they are now and especially the horrors of W.W.2. However  their  present campaign, while enveloped in the fog of war, shows a country which is willing to go to and beyond the extremes to achieve its objectives. The Israeli/Palestine problem is perhaps the most intractable issue in modern history and in origin is a created one. In history there was once a War titled ‘The Hundred Years War’  a misnomer since it lasted from 1337 to 1453.  In simple terms it was between Royal Houses of France and England. In historic terms all wars end but it seems as if a change in attitudes and aspirations of seismic  proportions will be needed to resolve the conflict in this region. The move towards the creation of an Israeli-Jewish state began in the 1870s’ as part of the Zionist movement of Herzl. This was accelerated by the Balfour Declaration of 1917 as displaced and oppressed Jews moved towards their ‘Promised Land’. It became a flood after the Second world War. This mass movement  of Jews into the region of Palestine led to the displacement of large numbers of the existing Arab population and hence the conflict. Since that conflict basically began post World War 2 it is now active or simmering for nearly seventy years and is a cockpit for the clash of Middle Eastern and European style-including the United States- culture and interests since then. The influence and support of the United States is pre-eminent with Israel because of the influence of the Jewish community in the U.S. Ireland’s policy on the matter is tied to that of the E.U. initially, and of course it would not want to be too outspoken, if it so desired, in case it caused problems with the U.S.
Last Tuesday night I tripped across the I.T.N. television news summary being read by Mark Austen and the subjects dealt with were; President Obama announcing more embargos on Russian oligarchs and institutions; the Gaza horror; the Ukraine tragedy; the gradual descent of Libya into civil strife; and the introduction of the chlorine gas in World War 1. The distraught demeanour of Mister Austen reflected this list of terrible news stories.
It is said that there are more refugees from conflict at the moment than at any time since World War 2. World War 1 was to be ‘The War To End All War’ but a hundred years on, in a world that has the capacity to achieve so much, it is far removed from that. Gaza is a tragic example of an intractable knot of one long conflict. 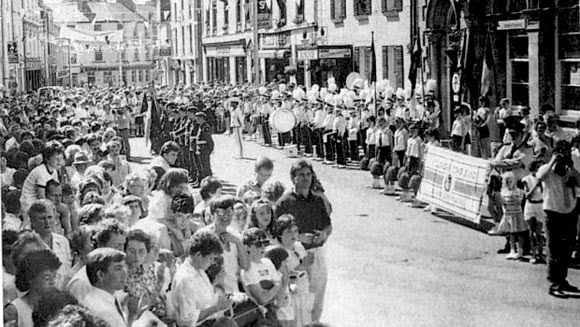 Considering the above paragraphs to write about anything else seems like trivia but life goes on in our tranquil world.  Next Sunday there is a remembering of the visit to Boyle of the actress Maureen O’Sullivan. While few of the younger generations will remember Maureen O’Sullivan from her screen appearances she will always be part of cinema history. She has become identified as the iconic Jane in the original series of Tarzan films around 1930. She also starred with a number of the great stars of that era. In the early 1980s’ I was responsible for a quiz in what was then The Ceili House Bar where Londis is now. I tried to include town questions as a matter of local interest. Once I asked; ‘What famous film actress was born in Boyle?’ I seem to remember the surprise at the question and I am not sure if it was answered on the night. I decided to follow up on Maureen O’Sullivan and with Frank Geelan came up with the idea of inviting Miss O’Sullivan to the town of her birth. With a very good committee, including the recently deceased Malachy Beirne,  it all came together on one of the few sunny days of that summer of 1998. It turned out to be a marvellous occasion with all the trappings. As R.T.E. reporter Joe Fahey relayed ‘Hollywood could hardly have done it better’. Maureen turned out to a very willing and deserving participant in it all and she was thrilled and really surprised at the great welcome she received. Among the many highlights was a concert by the best of local talent in the Royal Hotel on the Sunday evening. These included; Aggie Devine Conlon, Jim Casserly, May Conroy, Josie Mac Dermott and Kathleen Dwyer Morris and Mary Ryan amongst others. Luckily the whole two days were recorded and what a great record it is of that memorable week-end.
Current Boyle movie star Chris O’Dowd occasionally refers to this event as making an impression on him and perhaps having some influence on where he now is. On Sunday next Una Bhan have organised a detailed series of events, in the King House, recalling that day. So I suggest that you look up the programme of the day and call in at your leisure and recall a day when Boyle really shone and the Hollywood came to town.

Micheal O Suilleabhain Concert on Friday in the Church of Ireland

The Arts Programme booklet outline note for this event has a number of interesting local references. The concert title, ‘The Plains of Boyle’, is obvious. There is reference to David Thompson’s lovely book ‘Woodbrook’. Then there is reference to a piece having been commissioned by Cormac O’Malley in memory of his father Ernie O’Malley. Ernie O’Malley was a prominent activist in the War of Independence and the Civil War. Subsequently he published a classic memoir of the war titled ‘On Another Man’s wound’.   I have met Cormac O’Malley a number of times. He is a cousin of Mary Nicholson of Sheegora  a stalwart of Clarke’s restaurant. Also taking part in the concert is The Carolan String Quartet which reminds one that the O’Carolan Festival is taking part in Keadue this week-end. Mister O Suilleabhain, originally from Clonmel, was at the forefront of introducing Traditional Music Studies and Participation to the University of Limerick. He has done this pillar of Irish culture a great service.

Boyle Senior team drew with Elphin on Sunday in Division One League. A draw can always be seen as a point lost or a point won. For me, considering the second half it was a point won. On this Friday night they travel to Ballyforan to play St. Aidan’s. St. Aidan’s are doing too well at the moment so from Boyle’s point of view the two points here are a real requirement. Boyle still have to play Roscommon Gaels, Kilmore and Strokestown in the league and with three teams being relegated the issue is very much in the balance. Relegation would not be a healthy consequence.

At the week-end Galway play Kerry and Mayo take on Cork in the first two quarter finals. Kerry and Galway often have great tussles but the present Galway team seem limited enough. Still they do well in Croke Park. Cork blow hot and cold in  football which is the poor relation in that county to hurling. I fancy Mayo here. It seems to be consistently forgotten that Mayo ran Dublin to a couple of points in last year’s All-Ireland. So maybe in a year when they are not really considered to go the distance they might just do that! Armagh are gone on a talking to or not talking to the media ‘strike’ following the reportage of the bust up before the Cavan v Armagh game. I don’t know what’s going on there.
The two hurling games last Sunday were a big disappointment. Welford ran out of steam and Limerick’s goals around half time finished the contest. Tipp looked pretty good at the end but Dublin poor. So it is Tipp. V Cork and Kilkenny v Limerick. I suggest a Kilkenny v Cork final.