Remembering All-Ireland U 21 Finals Past:

‘The Eighth Wonder of the World’

On Saturday we will journey to Tullamore for a 50:50 game versus Dublin. Perhaps the Gods will smile on the blue and gold and on the Boyle representatives we have watched progress from Forest View green, the Abbey Park and now to an All-Ireland day in Tullamore. 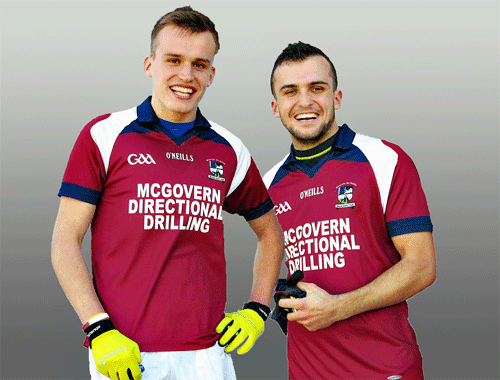 One of the most talented Roscommon teams that I had the privilege of seeing play was the 1966 All-Ireland winning U 21 team. The fact that I knew a number of the players personally from Roscommon C.B.S. days and that I came home from England a bit earlier than I might have done to see the game added to its allure.

While I have followed many Roscommon teams down the years with which I had no club connection having people you actually know playing in big games is an added bonus and you really want them to do especially well. This will be the case on Saturday in Tullamore when Donie and Enda Smith take the field for Roscommon. Through the years it has been Cian Smith, Ciaran Cox, David Casey, Tom Ryan, Gerry Cregg, Gary Wynne (who is doing some background work with Saturday’s team) Jonathan Conroy of recent times back to Pat Clarke around the seventies.

Pat Clarke was of course was a member of the 1966 team as was Pat and John Nicholson of Corrigeenroe, long-time Boyle resident John Kelly and also Ray Sheerin. I never saw Pat Nicholson play but I am reliably informed that he was a heck of a fine full back and a real loss to Roscommon in the later sixties. He entered the priesthood and is now in the United States. I hope to meet him when he comes home soon.

Anyway back in ’66 my school colleagues on the team were Martin Joe Keane a power house of a player from Creggs, next door to my own place of Fuerty. Martin Joe also played hurling and came from a family of sportsmen with his brother Johnny being a champion cyclist and another brother Seamus engaging in an ‘athlon of sports. The second classmate was Tom Henghan of Castlerea, a club that produced a plethora of fine footballers in the late sixties and early seventies largely due to the efforts of Danny Burke. Heneghan was a no-nonsense defender -mostly- for whom the current ‘Black Card’ would certainly be problematic. The third player was Mark or as we called him Markeen O’Gara from Ballintubber. A clever corner forward he was also to form a very formidable handball doubles partnership with Pat Clarke.

The U 21 Championship was introduced in 1964 and Roscommon had a muted introduction but the star-studded team of ’66 changed that. In the first round they defeated Galway with Pat Nicholson starring. They got a scare against Leitrim but had  a good win over Mayo in the Connacht Final with Dermot Earley the leader. They overcame Donegal in the All-Ireland Semi-Final. Heneghan in forwards and Martin Joe Keane at midfield were the main contributors. In the final Roscommon met the reigning champions, a fine Kildare side many members of which would become household names in Kildare football such as Mangan, Carew and Dunny. This would also be the case with the Roscommon team membership.

One of the foremost national sports writers of the day, John D. Hickey, suggested that; “It would be the 8th Wonder of the World’ if Roscommon beat Kildare. So while I have missed out on the first seven I was there to see the construction of the 8th. Another aside was that Kildare had just presented the Clarke Cup to the competition in the expectation of it not migrating at least that year.

While the first half of the game seemed to suggest that Hickey’s prediction, while grossly exaggerated, would prevail. But in a thrilling second half the tide changed and goals from Jim ‘Jumbo’ Keane and Jimmy Finnegan of Castlerea sealed the deal in Roscommon’s favour.

The team returned in triumph and there is fine picture of members of the side on Johnny Keaveney’s coal lorry on the Crescent in Boyle. The fact that a bit of suit ‘cleaning’ was subsequently necessary hardly mattered.

In 1969 Roscommon were very unlucky to lose to Antrim in the final. Rory Ahern R.I.P. as a member of the panel of this team.

On a memorable day at Hyde Park in October 1978, Roscommon did the double over Kerry. The senior side had been dispatched convincingly in the All-Ireland Semi-Final by the great Kerry side of the time. Now is a Ceannárus fund-raiser they regained some pride with a fine victory. This was eclipsed by a great victory for the U 21 team in the All-Ireland Final v Kerry. One of the stars of the team was Gerry Emmett who was top scorer on the day with four points. This team was captained by Seamus Hayden and managed by Tom Heneghan. The Kerry team included a number of their great players of that or any era including, in my opinion, the greatest of them all in Jack O’Shea. Others were Charlie Nelligan, Ml. Spillane, Sean Walshe and Eoin Liston.

Roscommon was back in another U 21 final in 1982. In the semi-final Tom Corcoran, father of today’s Tom, was instrumental in dispatching Cork, when he ‘chipped’ the Cork goalie from forty yards for a decisive goal. The final was against Donegal, before a huge crowd took in Pairc Séan Mac Diarmuida, Carrick-on Shannon. The result mirrored the miserable weather as Donegal 0.8 won to Roscommon’s 0.5. Gary Wynne was team captain and others with next Saturday connections are Tom Corcoran and Seamus Killoran.

Another Boyle connection to the present team is County board Vice-Chairman Seamus Sweeney whose son  Fintan (a cousin of young Killoran) has to be close to selection. Indeed one of the strengths of the team is the contribution that many of the players who have ‘come on’ have made.