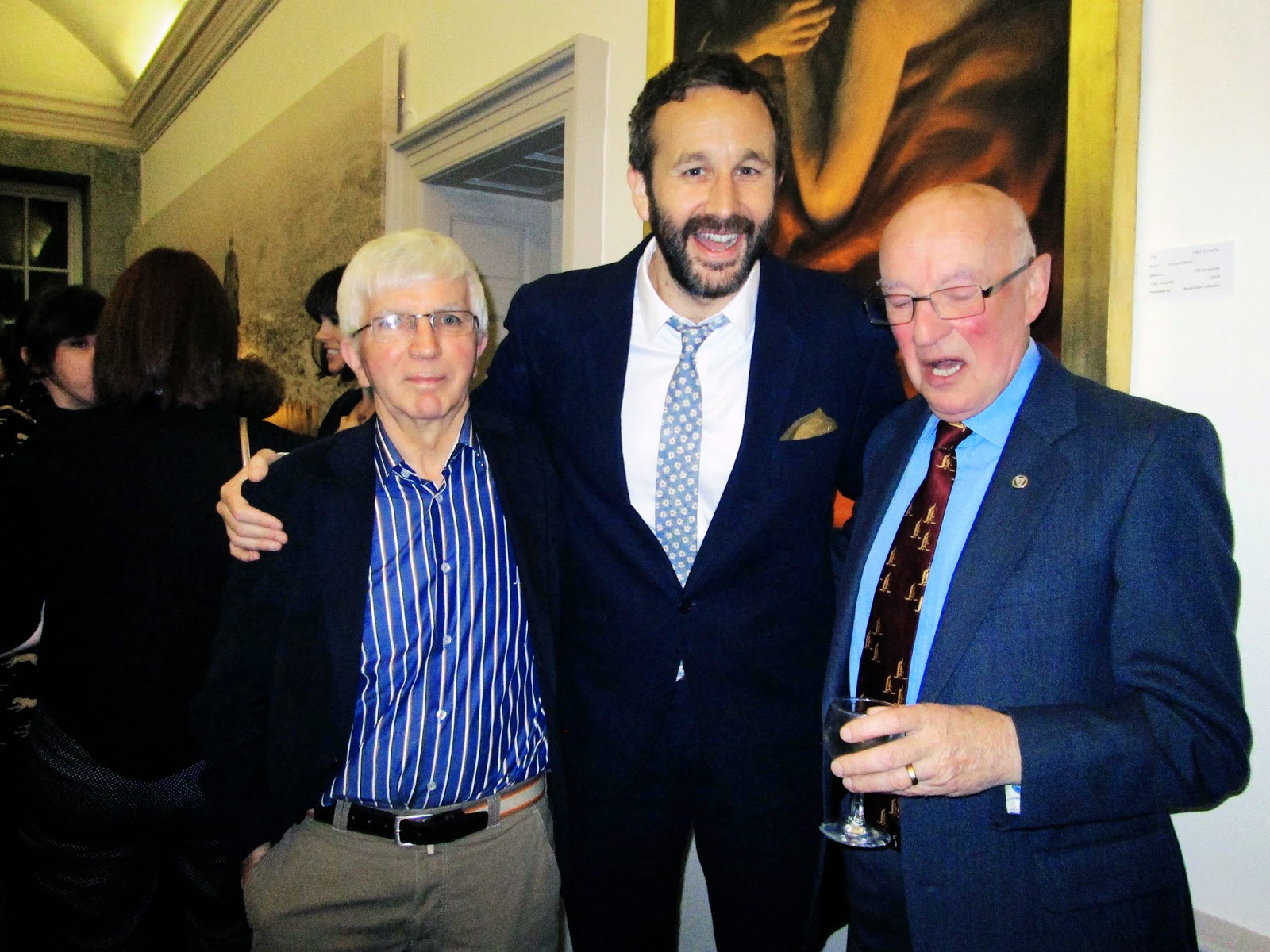 Chris O’Dowd gave his own unique interpretation of being granted ‘The Freedom of Roscommon’ at a truly atmospheric and celebratory occasion in King House last night. In a speech speckled with wit, humour,  insight and emotion he had the audience eating out of the palm of his hand. In fairness the same audience had come to cheer and celebrate him. Chris started his speech by questioning the notion that he needed to be freed as he never felt ‘imprisoned’ in his native Roscommon and wondered now what it all meant. His insightful view of Roscommon people’s life longevity was linked with clever references to Roscommon’s A.& E. and Water issues. Looking around the audience of familiar faces he took the opportunity of thanking, in words mixed with emotion, the many people who had been an influence in his early life especially his parents Denise and Sean with his extended family referring to them as ‘local heroes’. They must have been hugely proud of him last night. Chris went on to  reference his former teachers who were present such as Mister Paddy Nangle also Frank O’Mahoney who introduced him to the stage; those who gave him his ‘first pint’, ‘first kiss’ and coached him in sport.  He embraced the county by mentioning many locations where he had played football and lost, romanced with varying degrees of success and all the building blocks  of life that HIS county of Roscommon had provided him with. He was full of praise for his home county and town and referred to its artists and writers and the names of Douglas Hyde, John McGahern, Brian Leyden, Percy French were interspersed with John Carty, Johnny Reilly and Maureen O’Sullivan and tellingly of the Boyle- born Suffragette, Margaret Gillespie Cousins. Chris also made numerous references to his radiant wife Dawn O’Porter and the pending birth of their baby.
‘When I lose the run of myself, Roscommon stays put. I love it. Not because it is privileged but because it’s real’ he evinced.
The event was organised in great detail by Roscommon County Council with Fiona ni Chuinn at the helm and acting as a pleasant and efficient M.C.  It must have been one of Mr. John Cummins's most pleasing engagements as Chairman of Roscommon County Council to present his neighbour Chris O’Dowd with the honour of Freedom of the County following in the footsteps of Brendan Shine, Dermot Earley and of President Mary McAleese with her husband Martin. John spoke with humour and brevity about Chris and outlined  the path to the award and what privileges such an honour bestowed. He praised Chris’s contribution to ‘enhancing the image and profile of his native county and of helping to putting his native town of Boyle especially on the map’.
Tommy Ryan Chief Executive Officer of Roscommon County Council endorsed the Chairman’s sentiments stating; ”We are proud of what you have done and that you have not forgotten your native place is so obvious in so many ways”. The C.E.O. went on to talk of what the county has to offer a sentiment that was pervasive on the night. He concluded by saying that; “ Chris is a product of the environment and community he grew up in” and he urged Roscommon people to ‘talk up their county’ as Chris has so regularly and effectively done.
A number of appropriate presentations followed including a symbolic ‘Red Rhino’ scarf to Chris’s wife Dawn.
It was a great night of celebration with Chris and his speech the diamonds amongst his family and friends glowing with pride. The media, national and local were out in force. Ciaran Mullooly, regional correspondent for R.T.E. television, talked to Chris and a number of people who knew him and this all featured on the prime time 9 O’Clock News  on R.T.E. It was reminiscent of another great social occasion in Boyle in August of 1988 when another star, Maureen O’Sullivan, born in Boyle, returned to her native place to be honoured by and to honour  her native place.
(The Broadway, New York play of Steinbeck’s ‘Of Mice and Men’ starring Chris will be screened in Carrick-on-Shannon cinema on Thursday November the 6th at 7 pm. To book you can call 071 967 2000 and Lauren will look after you).

[P.S. I had intended to break some more good news of another Boyle film activist, Paul Young and Cartoon Saloon’s current creation ‘Song of the Sea’ which promises to be ‘big’ when released next spring but I will get to that next week.]

‘All the President’s Men’
Continuing the film theme one of my favourite films is ‘All The President’s Men’. It deals with the Watergate break-in and the eventual resignation of President Nixon mixing, fact, drama and tension with compelling performances from Robert Redford and Dustin Hoffman. Jason Robards won a supporting actor Oscar for his portrayal of the editor of the Washington Post newspaper which was central to the film. Robards played the role of the editor named Ben Bradlee who died this week. If you haven’t seen this film I cannot recommend it highly enough.

Boyle Church Roof, Fundraising Concert:
While the above is finely noted on realboyle home page I thought I might encourage support for the James Kilbane concert on Friday evening.

The Season of the Book Launches:
Barry Feely will launch his book “A Life in Stone” on Friday November the 7th in Feelystone New Kitchen Showrooms, Boyle, with Guest speaker Brian Leyden. (I will return to Barry’s book anon).
On Saturday evening next at 7.30, in Gleeson’s Restaurant,  Roscommon, Kathy Hegarty Thorne will launch two volumes of her history of the I.R.A titled ‘Echoes Of Their Footsteps’ dealing with the IRA nationwide from 1913 to 1922 and from 1922 to 1924. A third volume to be launched will go to press at a future date. Kathy-Hegarty-Thorne who has connections in the county produced the very important book, a number of years, on the Old IRA in Roscommon titled ‘They Put the Flag a Flyin, the Roscommon Volunteers 1913-1923’.
Elsewhere in the South of the county Shane Curran will launch his book titled ‘Cake’ which will get considerable traction in Roscommon I imagine.
I read an interesting piece in the Sunday Indo regarding ‘Ghost’ writers for sports books. It brought to mind a story I heard regarding the Liverpool player Rob Jones who told Jason McAteer that he had an autobiography coming out.
McAteer not noted as being the brightest pin in the set asked:
‘What is that?’
To which Jones replied; ’The story of my life and football’
McA. ‘Is it any good?’
Jones; ‘I don’t know, I haven’t read it yet’.

Congratulations To..
The Boyle U 12 side who completed the grand slam with victory over Clann na Gael in the Division 1 League final on the score of Boyle 1.7 Clann 1.4. this is a very good side and I commend the work being done with them.
Boyle minor team on their 3.16 to 4.8 victory over Michael Glavey’s in the Division 3 Final at Knockcroghery on Saturday. Hopefully they will progress through the divisions henceforth. While a number of players were very impressive my informant –since I was unable to be there- was hugely impressed with the performance of Darren Deery.
Boyle have a big game on Saturday October 25th at 4 in Castlerea V Michael Glavey’s in the first of their U 21 Championship games.
Coming in December is a Boyle GAA promotion ‘Who Wants to Be a Thousandaire’ which will be launched on Thursday November the 6th. More later regarding same.

Posted by realboyle.com at 2:20 PM