The World Cup Carnival / Shorts on the GAA Scene.

Although I occasionally get a little guilty at the amount of time I spend watching the World Cup, especially the earlier evening games, it makes for compelling viewing for the football enthusiast especially. There may have been some poor games but they have been submerged by the drama and entertainment in the overall package. While a number of the big guns have departed a number of the traditional football blue bloods are still there. It seems as these are having the luck or maybe make their luck. I think it was golfer Gary Player who said; “The more I practise the luckier I get”. In the luck stakes for one side to have it means there has to be a balancing hard luck side.
To every action there is an equal and opposite reaction and all that. Last night it was the case of the U.S. missing out against Belgium again in extra time like a number of enthralling games. While Belgium were the better team overall the huge effort by the U.S. team was as they might say awesome. The wish of most observers was that the game would go to penalties and the opportunities existed to make that happen. Still if your goalkeeper is the team’s hero then it is a barometer of the overall balance of play and the truth of the result.
Algeria too had to yield to Germany in similar circumstances as did Switzerland to Argentina. A late, late, penalty garnered by Arjen Robben meant heartbreak for Mexico. Greece too went down in another thriller which meant that at least one real minnow, Costa Rica, survived into the quarter-finals. Costa Rica’s supposed practising of penalties paid off with them converting all five to three for Greece.
The quarter-finals begin on Friday with a possible chess game between heavyweights of the game Germany and France.  Brazil v Colombia is the later game. On Saturday Argentina take on Belgium with the Netherlands playing Costa Rica.
The first semi-final will be on Tuesday and the  second on Wednesday. There are four previous winners in the last eight so the odds are stacked on this trend continuing. Indeed the number of winners is small overall with four failing to get to this stage; Uruguay, Italy, England and Spain. Still the challenge of many smaller nations in this World Cup promotes the idea that new names will emerge to join the elite group.
The possibility of a country from Africa, Asia or especially a U.S. win would have a huge impact on this truly world game. While these are just football games many of them, in this World Cup more than one can remember of any other, are embellished with high drama and emotion with more to come. 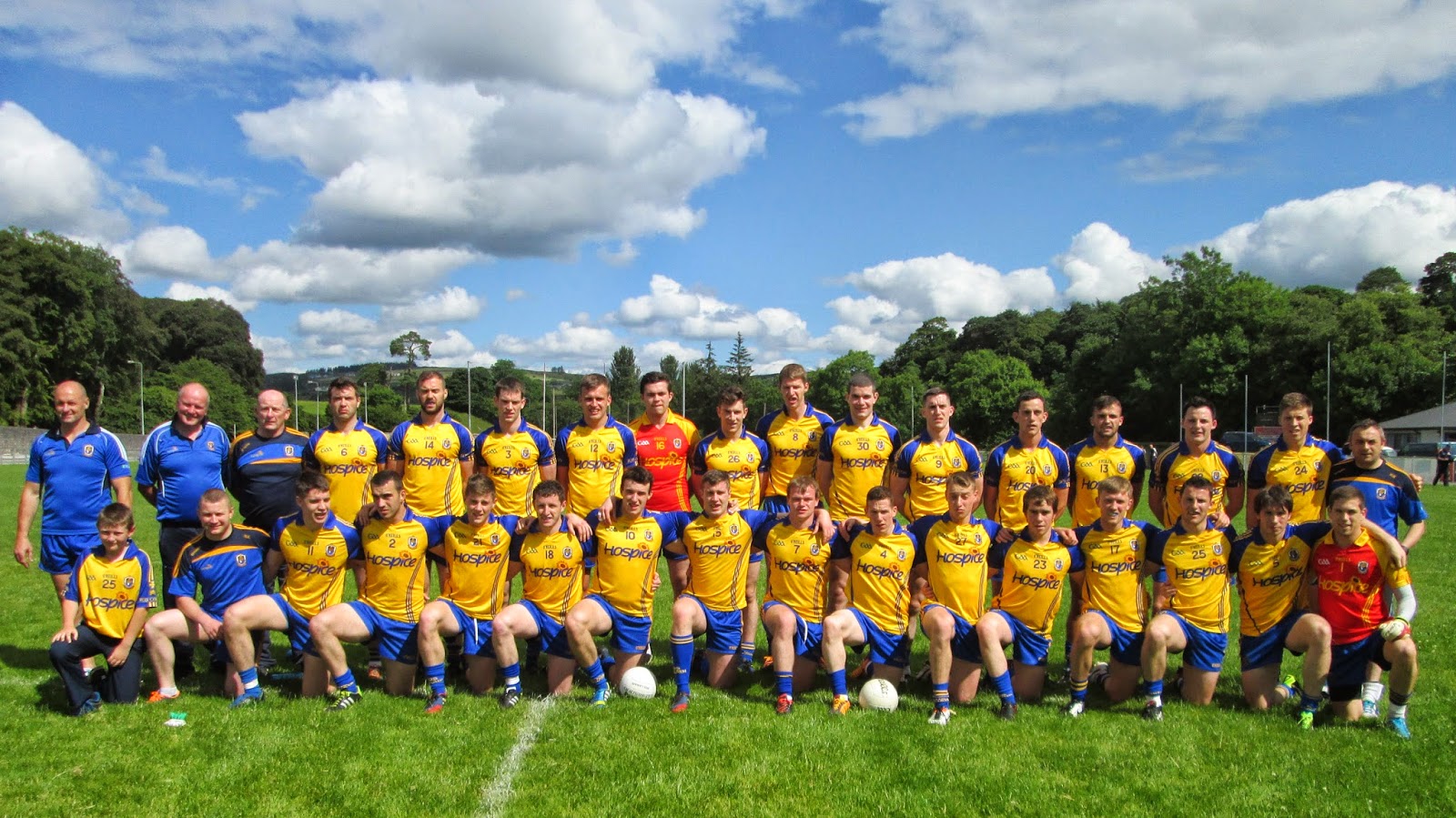 The Roscommon team in the Abbey Park on Sunday v Sligo 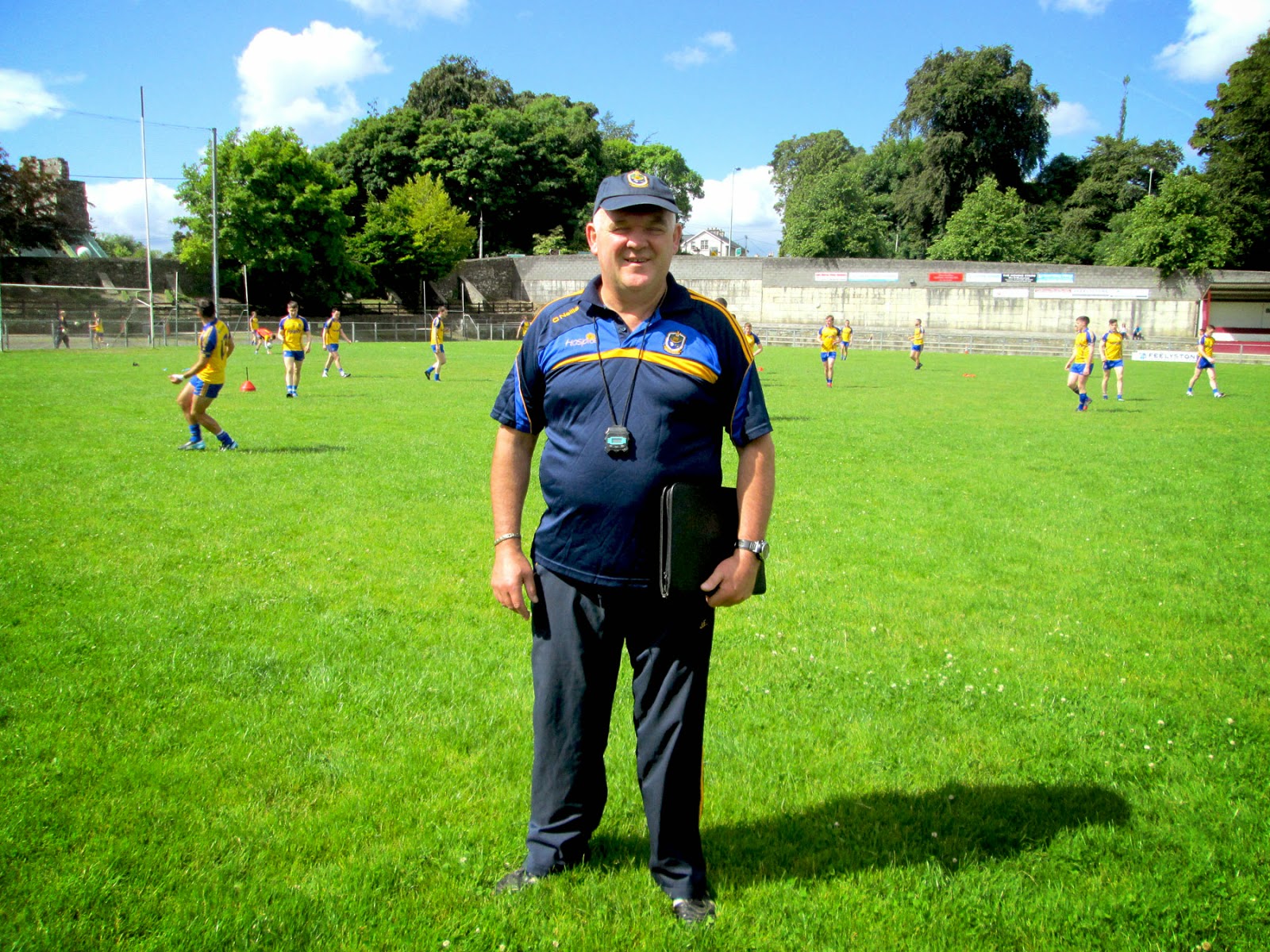 Shorts on the GAA Scene

I had not meant these paragraphs to be so sports orientated but it is hard to avoid it with all that is going on. Next week does not look too promising on that score either. Perhaps when the Arts Festival starts some calm will emerge. On Saturday last the Fergal O’Donnell managed Roscommon minors overcame a fancied Leitrim side. This puts them in the Connacht final against Mayo who beat Galway. Galway had earlier defeated Sligo.
Boyle’s representative on the Roscommon team, Evan McGrath, had an outstanding game, especially in the second half. Again as in the World Cup one has to feel for Leitrim who put such an effort into the preparation of this team for which they had such high hopes.
On Sunday, in the sunshine of the resplendent Abbey Park, Roscommon overcame Sligo in a good challenge. Boyle’s representatives here, Enda and Donal Smith, were prominent with Donal, knowing the local geography, taking some fine scores. Roscommon journey to Kingspan Breffni Park on Saturday evening in the championship. This will be a real acid test for what I see as an emerging side of consequence.
The Abbey Park is a hive of activity this week with the Kellogs Cul Camps catering for over one hundred young people as they train up in the game and have fun.
Last Sunday saw Kilkenny defeat Galway in a replay at Tullamore. While this would indicate that ‘the cats’ are still there they are not the force of a few seasons ago. Still they should add another Leinster title at Dublin’s expense on Sunday in Croke Park. Galway’s runner-up prize from Tullamore is a knock out joust with Tipperary at Semple Stadium on Saturday evening. It was hardly a prize at all.
Slan.
Posted by realboyle.com at 6:59 AM